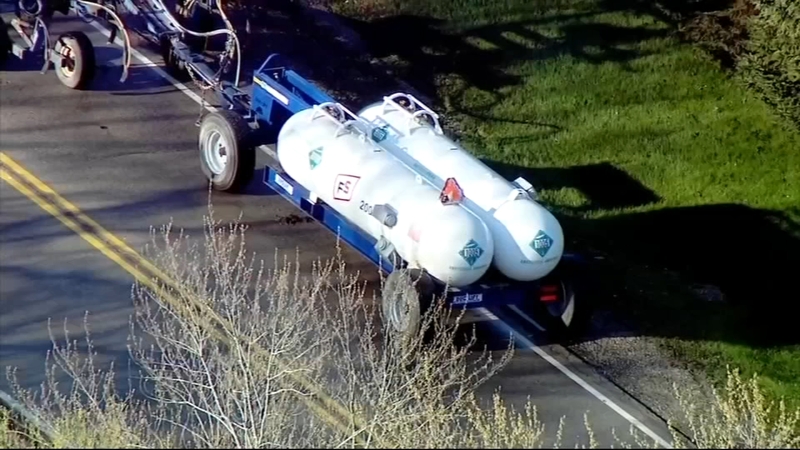 BEACH PARK, Ill. (WLS) -- Federal investigators are in Beach Park Friday to investigate a chemical spill that sent dozens of people to the hospital.

Authorities said a 59-year-old Wisconsin man was driving a tractor towing two separate 2-ton containers of anhydrous ammonia near the intersection of Green Bay Road and 29th Street when the chemical somehow started to leak. Initial reports suggested the vehicle was involved in a crash, but the sheriff's office later said that was not the case.

The leak created a toxic cloud that lingered for several hours, Authorities ordered residents within a 1-miles radius to stay inside and close their windows. Area schools were closed for the day.

"This type of event is about as bad as it can possibly get," said Sergeant Christopher Covelli, of the Lake County Sheriff's Office.

Federal investigators are now stepping in to help figure out how the spill happened in the first place.

The tractor's owner and the person driving the tractor have been cooperating with the investigation, Covelli said.

Authorities released audio from 911 calls made in Beach Park Thursday:

A total of 40 people were transported to the hospital. Eight remained hospitalized Friday afternoon; seven people, including one firefighter, were in critical condition in the intensive care unit at Vista East Hospital and one man was in good condition at Lake Forest Hospital.

Members of the EPA monitored air quality Friday morning. Anhydrous ammonia is a fertilizer and is so toxic that doctors say just a breath or two can paralyze the airway.

Lyle Caldara lives directly in front of the incident location. A former farm supply worker, he recognized the smell and knew something was wrong right away.

"You could not see out the window," he said. "That was it, fog at the edge of the window."

He worries about the potential future hazards this leak may have caused.

Antonio Ellis said two of his relatives who live in the north suburban village - just four blocks from where the spill happened - were rushed to safety by ambulance after both were overcome by the toxic fumes.