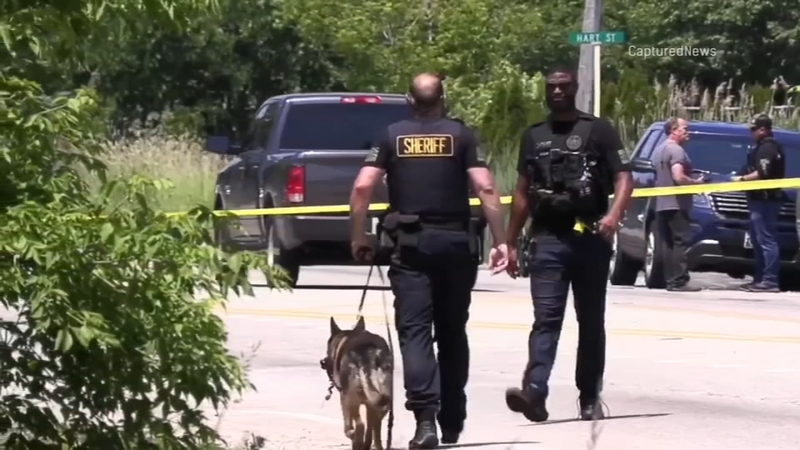 BEACH PARK, Ill. (WLS) -- A fugitive was shot and killed by authorities attempting to serve him a murder warrant in north suburban Beach Park Tuesday.

The Lake County Sheriff's Office Fugitive Apprehension Team and the US Marshals were at a residence on Beach and Green Bay Road when the shooting occurred around 12:30 p.m., according to Sergeant Christopher Covelli.

A person was shot in north suburban Beach Park as authorities served a murder warrant Tuesday.

"I was just sitting out here on my yard and I just heard five or six gun shots," neighbor Lupe Cardoso said.

Authorities were trying to arrest a 24-year-old man wanted for first-degree murder in a 2018 homicide in Zion. After nearly two years, investigators found him in a vehicle outside the Beach Park home.

"The officers that were there to conduct the apprehension had just arrived and were starting to move towards the house. They then noticed somebody in a vehicle. He exited the vehicle with a hand gun and started shooting," Covelli said.

Police fired back, hitting the suspect. The man was transported to an area hospital, where he was pronounced dead, Covelli said. Authorities are not identifying the man until his family can be notified.

"There were several people in the house including a child," Covelli said. "The shooting did occur outside of the house in the driveway. Nobody inside the house was injured."
Two officers injured in the incident were also transported to area hospitals. One had a laceration-type injury to his arm, but it is not clear if it was a graze wound, Covelli said. The other was transported for evaluation.