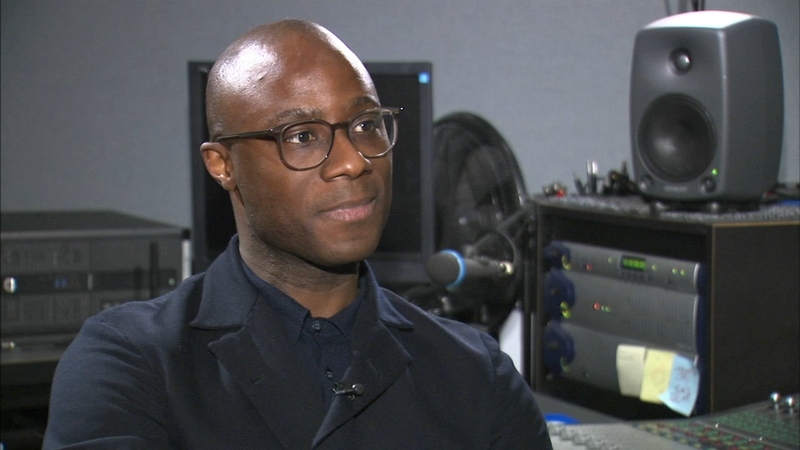 CHICAGO (WLS) -- "If Beale Street Could Talk" marks the very first time a James Baldwin novel has made it to the big screen.

A young woman is deeply in love and expecting a child. The man she's ready to marry is unjustly charged with a serious crime, set up by a racist officer.

It's a story about young love and how radical injustice shatters a couple's hopes for the future. Staying true to Baldwin's artistry was a mission.

'If Beale Street Could Talk' marks the very first time a James Baldwin novel has made it to the big screen.

"You just really felt a familial spirit on the set every day. It was a lot of love, not only for Baldwin, but for each other and the material and everything we knew that was at stake," said Stephan James, who plays Alonzo "Fonny" Hunt.

"One of the special things is so many people that worked on 'Beale Street' worked on 'Moonlight' as well, but everyone just respected 'Beale Street' as its own project. 'Moonlight' happened - and everyone is thankful for what happened with it - but now we have this new special story to tell. I think we're just excited about people seeing it and receiving it," said KiKi Layne, who plays Tish Rivers.

Director and screenwriter Barry Jenkins won an Oscar for "Moonlight," but this is a movie he's aspired to make for years.

"So much of what takes place in this book and in this film could easily take place today. Some of it just took place yesterday," Jenkins said.

"Beale Street" was a dream project for Jenkins, who said casting was crucial.

"I'm hoping that an actor will appear and show me who the character is, whether that's somebody who has 8,000 Oscars or somebody who's never been in a film at all," Jenkins said.

More than 300 actresses were after the lead role.

"We found KiKi Layne, who is a graduate of DePaul University's theater program," Jenkins said. "She had never been in a film before. But to me, when I saw her, I knew she was my main character."

Being in Chicago was a homecoming for the actress. She said it felt good to be back.

"I went to DePaul. I studied acting there. I graduated in 2014, and then I was hustling in the amazing Chicago theater scene for three years after that. Man, it feels so good to be home!" Layne said.

The two leads also described what it was like working with Jenkins.

"Barry just sort of creates this environment that's so easy to play in, for actors. I sort of was in awe of him every day," James said.

"He has such a warm energy. I feel like it just permeates the entire environment, so it's really warm and supportive," Layne said.

An infamous envelope mix-up occurred when Jenkins won his Academy Award for "Moonlight".

"I was inside, so you guys saw more than I saw. I didn't see the card that said, 'Moonlight'. I was just as confused as somebody sitting at home," Jenkins said.

"Now I can do many of any different million things. People are trying to get me to say 'yes' all the time. Now my career has to be about being very diligent, about saying 'no'. Knowing that I already had this project very near and dear to my heart was almost a protection from the sophomore slump. I think in that way, there's a power. One is showing how wise Mr. Baldwin was, but also showing how this is a call to arms. We need to get together and fix some of these issues," Jenkins said.
Report a correction or typo
Related topics:
arts & entertainmentbooksentertainmentmovietheaterdepaul university
Copyright © 2022 WLS-TV. All Rights Reserved.
TOP STORIES
10 shot, 2 fatally, on Near North Side
13-year-old carjacking suspect critically injured in police shooting
City Council to take up ordinance on curfew changes
Marine veteran seriously injured in Irving Park hit-and-run
Motorcyclist strikes, kills man crossing street on NW Side, police say
CTU votes for new president
Disney celebrates National Streaming Day with drone show over DTLA
Show More
City Council committee to vote on NW Side casino plan
Funerals begin for victims of Buffalo supermarket shooting
Could remains in shrinking Lake Mead be tied to Chicago mob?
Oakbrook Terrace fights back after red light camera permit revoked
911 dispatcher who took Buffalo shooting call put on leave
More TOP STORIES News