Bearman, a Chicago Bears superfan, is a finalist for Ford Hall of Fans induction 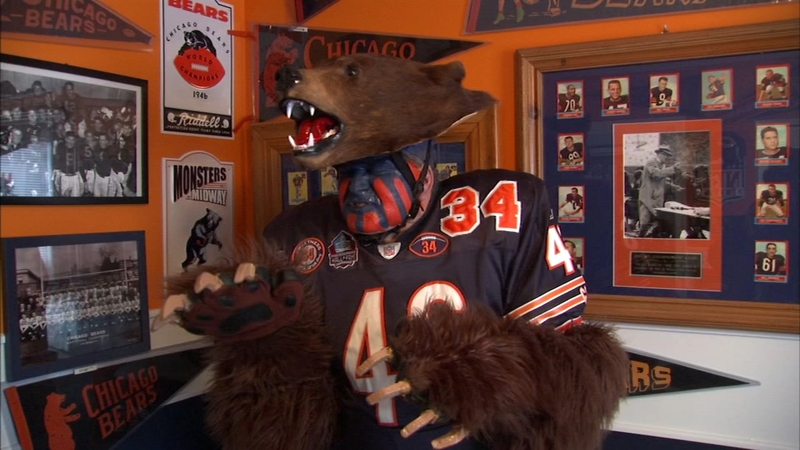 Bearman, Chicago Bears superfan, is a finalist for Ford Hall of Fans induction

PLAINFIELD, Ill. (WLS) -- The Chicago Bear's ultimate fan is a finalist to be inducted into the Ford Hall of Fans.

Don "Bearman" Wachter -- whose fan uniform includes a bears' head and fur along with a No. 46 jersey -- also has dedicated his Plainfield home to the team.

On Tuesday, the field of possible inductees was narrowed to three, and Wachter made the cut. The winner will be announced this weekend during the Super Bowl.

For Wachter, it all started in 1996, when the face-painted, season ticket holder needed something more to go with his jersey.

"I always wanted to wear something that really showed our Bear logo, I love the Bear logo, and I'm thinking the ferociousness of it, it exemplifies our team," he said.

And then he just went for it.

Wachter was being interviewed by Ford when former Bears player Brian Urlacher surprised him with a knock on the door of his home.

"They told me to go answer it and it was Brian Urlacher in all his glory with the gold jacket, the Hall of Fame patch," Wachter said. "My mind was blown and he said, 'Congratulations Don, you're nominated for the Ford Hall of Fans."

The video was posted in a Chicago Bears Twitter video.

.@BUrlacher54 and @Ford are giving the one & only 'Bear Man' a chance to be inducted into the Ford Hall of Fans and YOU can help make it happen.

"A fan is a fanatic. It doesn't matter if you're good or bad, you support your team no matter what," Wachter said.

Regardless of the results, his fandom will be unwavering.

"There are a lot of diehard Bears fans. It's hard to pick just one. I'm just so honored and flattered that i get to represent Bears Nation. Bears fans are the best in the world," he said.