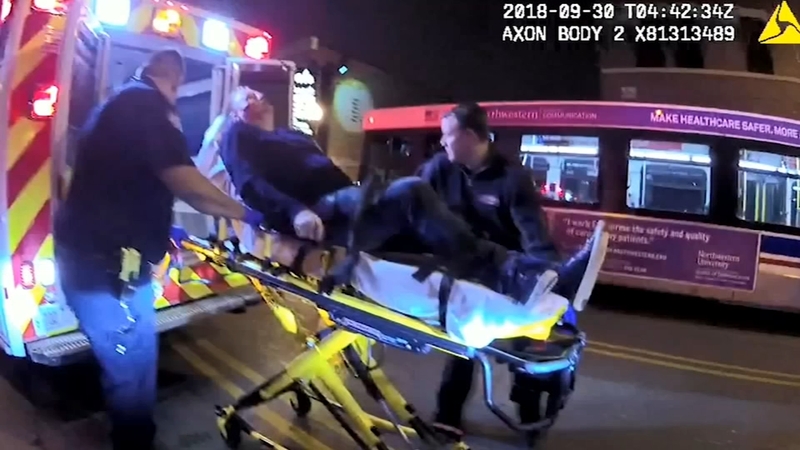 CHICAGO (WLS) -- An attorney for two men who said they were brutally beaten by an off-duty Chicago police sergeant outside a gay nightclub more than a month ago filed a lawsuit Thursday, saying a CPD "code of silence" is why authorities have not yet charged and fired him.

Subpoenaed police bodycam video shows screams of anguish as John Sherwood was loaded into an ambulance. He had suffered a compound leg fracture - his bone was sticking out of his skin.

"I was standing and then all of a sudden I was taken out. I heard my leg snap and I tried stepping on it. Someone had kicked me and it was him - it was Elkins," Sherwood said.

Sherwood and his partner of 14 years, Tomasz Stacha, said they were beaten in a fit of rage.

"The city is on notice that this guy is a criminal within the CPD. He's a criminal with a badge. He should have been fired a long time ago. It's time they took action," said Attorney Tim Cavanagh, Cavanagh Law Group.

Sherwood and Stacha said the brawl lasted half a minute, but had serious consequences. Stacha sustained facial injuries and was left in a neck brace.

"Who can do that? First class criminal or something. Who can make that much damage in 30 seconds?" Stacha said.

Cavanagh blasted the delay in bringing criminal charges against Elkins, despite a positive identification more than a month ago. Police interrogation video showed one plaintiff confirming Elkins was one of the culprits.

Attorneys said Elkins has more than two dozen citizen complaints against him.

Elkins was relieved of his police powers back in 2015 after attorneys said he was accused of sexually assaulting a young boy in Michigan and pleaded guilty to a lesser charge, according to CPD Chief Communications Officer Anthony Guglielmi. Those powers have not yet been restored, as a CPD investigation continues.

"I know that he has been under investigation for some while now. If those charges are proven, he should be held accountable," CPD Supt. Eddie Johnson said Thursday.