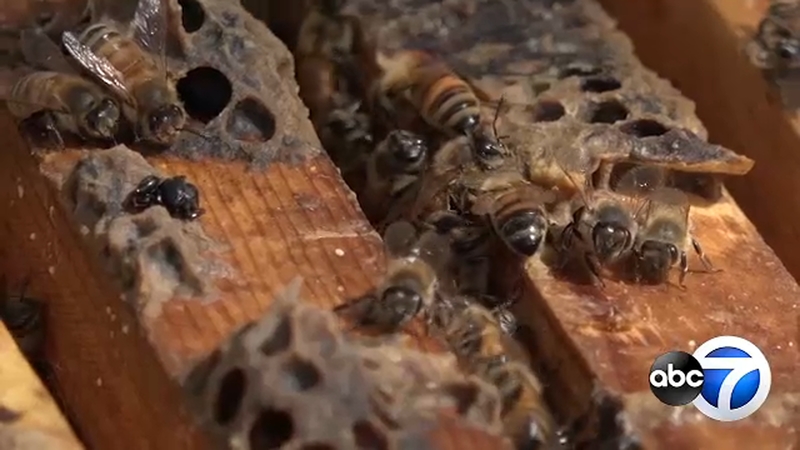 LAKE COUNTY, Ill. (WLS) -- For the growing number of beekeepers in Lake County, the arrival of 3 million bees was a welcome sign that winter was finally ending.

Lidia Andronic, co-owner of Belmont Feed & Seed in Avondale, flies in millions of bees every year for Bee Day. She said interest in bees has increased dramatically over the past decade.

"We distribute packages to, I don't know, 150 people," Andronic said. "It's a lot of people in the Chicago area which keep a beehive for pollination, for just the love of helping the bees thrive."

Data from the Illinois Department of Agriculture back up the claim of increasing interest and presence of bees. From 2000 to 2018, the number of registered beekeepers in the state rose from 1,142 to 4,308 and the number or registered colonies rose from 18,504 to 30,017.

Gene Robinson, Director of the Bee Research Facility and entomology professor at the University of Illinois, credits three factors with the growth of beekeeping as a hobby.

After a steady decline that started the 1980s, Illinois is finally returning to levels of beekeeping not seen for more than 30 years. For professional beekeepers like Colin Ley, an increase in hobbyists has had a mixed impact on his work.

"It's great that people are involved and trying to take action in you know promoting beekeeping and preserving pollinators," said Ley. "But when people don't take into account how much work might go into this beekeeping, this hobby, it can actually cause a lot of problems for us. They can be a host for disease and parasites, which affects all the beekeepers in their area."

"We understand the bee health crisis now in terms of the four Ps: pesticides, pathogens, parasites and poor nutrition," Robinson said. "And the P that refers to the parasites refers, in spades, to the Varroa (Mite). It is the most serious parasite that's present in the United States at this point in time."

According to Ley, the Varroa Mite is "public enemy no. 1 for beekeepers right now. It's really the only major issue against the bees that we can play a part in correcting."

To test for mites, beekeepers need to pour about half a cup of bees from a hive into rubbing alcohol, and swirling the bees in the liquid until potential mites fall into the bottom of the cup. If any mites fall to the bottom, the hive likely needs to be treated with chemical.

"Beekeepers primarily use chemical treatments to try to kill the Varroa Mites in the bee colony. That's tricky because mites and bees are cousins. They're very closely related. And so chemicals that work on one very likely can work on the other," Robinson said. "Nevertheless, there have been a few over the years that have been developed and approved, and they have had some success."

While the short term solution for beekeepers is usually a chemical one, Robinson said that academic research facilities around the country are seeking long-term solutions for the Varroa, such as genetic and cultural treatments.

Along with the Varroa Mite, Andronic and Ley each made another plea to new beekeepers and their neighbors: stop using chemical weed killers.

"It's a lot of chemicals out there that people put in their lawns, please stop using them," Andronic said. "It will kill the weed yes, but it will also kill the bees."

Despite threats to bee health, though, they still encourage more people to pick up the hobby.