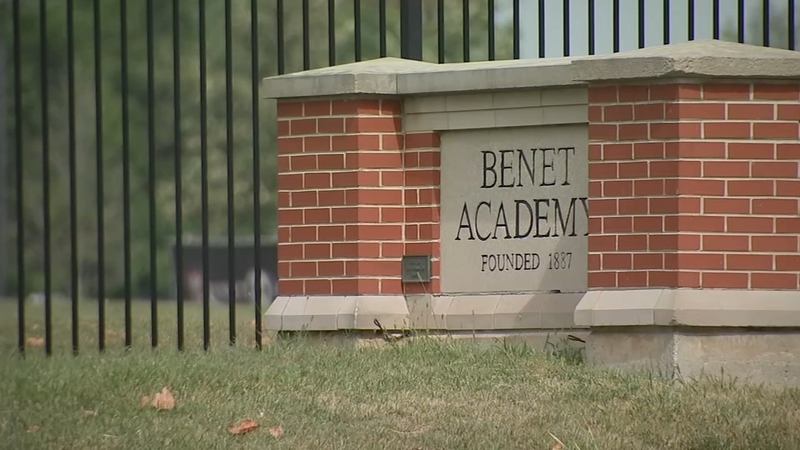 LISLE, Ill. (WLS) -- There was a protest outside Benet Academy in Lisle Monday morning after the Catholic school pulled a job offer for a new girl's lacrosse coach allegedly because the candidate revealed she is married to a woman.

"Unfortunately, when her paperwork got to the head of the school, he decided to rescind her offer because her emergency contact was listed as her wife," said Colleen Savell, who has been the assistant varsity girl's lacrosse coach at Benet for the last six years.

Savell said the head coach is fully qualified, and left her previous job as a lacrosse coach for Benet, which is also her alma mater. Savell said Benet is sending the wrong message to students and alumni.

"It's a disappointment," Savell said. "I'm thinking about the kids who go to school here and kids who are part of the LGBTQ community and how they're feeling."

Students and alumni have condemned Benet's action, sending a petition to the administrations that says, in part: "We write to express our dismay and anger at the news that Benet Academy recently declined employment to an otherwise qualified candidate on the basis of her marriage to another woman."

Students organized the rally Monday morning before the start of school, where participants were encouraged to wear rainbow gay pride masks.

"It was truly amazing to see all that and then a rainbow popped up over the protest and I think that was a message from the higher ups that what we're doing is right," Savell said.

A spokesperson for Benet Academy said in a written statement: "Benet Academy respects the dignity of all human beings to follow their conscience and to live lives of their choosing. Likewise, as a Catholic school, we employ individuals whose lives manifest the essential teachings of the Church in order to provide the education and faith formation of the young people entrusted to our care."

The statement only enraged vocal students, parents and alumni - who include elected state officials.

"We are horrified, but we are not surprised at all," said Kim Gannon, faith-based activist and former Benet Academy student. "In fact, this experience has been slightly validating because this sort of thing has been going on with the administration for years. This has been a major catalyst that has struck a nerve for a lot of us."

That tweaked nerve is the setting of a movement, now thousands of people deep, demanding the coach be reinstated and permanent changes be made to the school's LGBTQ policies and practices.

"The biggest thing we need to worry about is these kids and if they feel safe at Benet Academy, and I do not believe they do," Savell said.