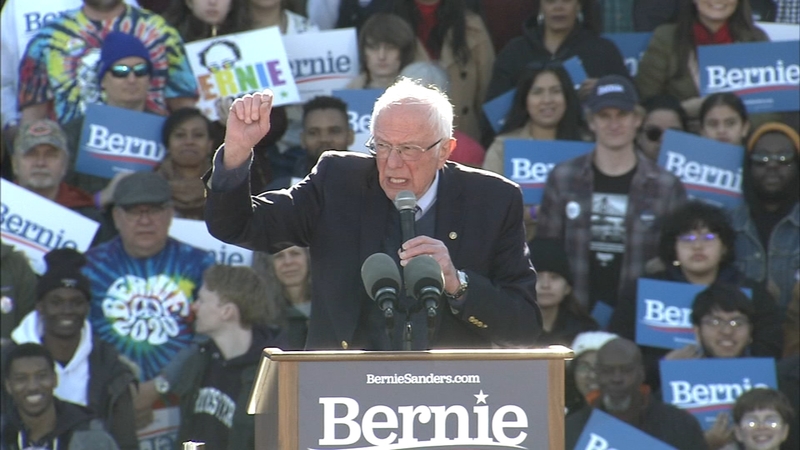 CHICAGO (WLS) -- With Illinois playing a potentially critical role in deciding who will be the Democratic Party's nominee, Sen. Bernie Sanders brought his campaign to Chicago Saturday.

Sanders rallied with thousands of supporters in Grant Park in an effort to regain momentum lost after Super Tuesday.

"I ask you to join me in welcoming to Chicago a transformational leader that America needs, the next president of the United States, Bernie Sanders," Garcia said.

Sanders addressed the importance of the November election for Democrats.

"Brothers and sisters, we are here for some very important business. Today we make it clear that together we are going to defeat the most dangerous president in the modern history of this country," Sanders said.

Before the rally, ABC7 Political Reporter Craig Wall talked with Sanders one-on-one about the upcoming primaries and Joe Biden.

Sanders told Wall that in order to blunt Joe Biden's momentum, "We need to win states, not only here in Illinois, across the country."

Sanders dismissed the endorsement, calling them part of the establishment he is fighting against.

"I think we've got to make the case that in the campaign we have one candidate Joe Biden who in the past has been on the floor of the Senate talking about the need to cut Social Security, to cut Medicare," Sanders said.

He said Tuesday's primary in Michigan won't make or break his campaign.

At the rally, he seemed to suggest Biden could win the nomination.

"At the end of the day, we're going to get behind the winner," Sanders said.

For supporters, the energy in Grant Park was what they needed to bolster their hopes.

"I was here the night Obama won in Grant Park and I felt the same way today," said Marguerite Horberg.

"I feel more hopeful than ever," Albert Lewis said.

Sanders had planned a second rally in Rockford on Tuesday but it was cancelled, citing scheduling constraints.