Road Trip! How to visit major landmarks in every state How cool would it be to go on a road trip through the US and visit major cities and landmarks in every state? Sounds like a planning nightmare, but worry not aspiring country-trotters, a computer science whiz has planned the trip out for you. 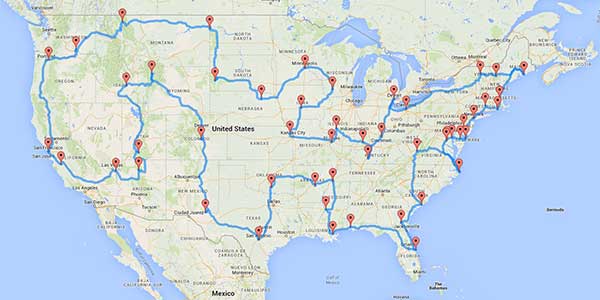 After a misleading story claiming to have planned the ultimate U.S. landmark road trip went viral recently, many were disappointed to discover that the map was not as advertised. Someone had taken a map not belonging to them and made the claim it showed the optimal route to visit "every major U.S. landmark." Computer science Ph.D. student Randal Olson and a reporter from Discovery were among those disappointed.

"Why not use the same algorithm from (another project) to compute the optimal road trip across every state in the U.S.?" Olson wrote in his blog. "Visiting every U.S. state has long been on my bucket list, so I jumped on the opportunity and opened up my machine learning tool box for another quick weekend project."

Olson and Discovery agreed upon one major landmark from every state in the contiguous U.S. To get to 50, they added a second landmark from California and one from Washington D.C. Then Olson got to work figuring out the route.

The best part, the Discovery article points out, is that the route is a circle. You can start from the landmark nearest you and follow the path. 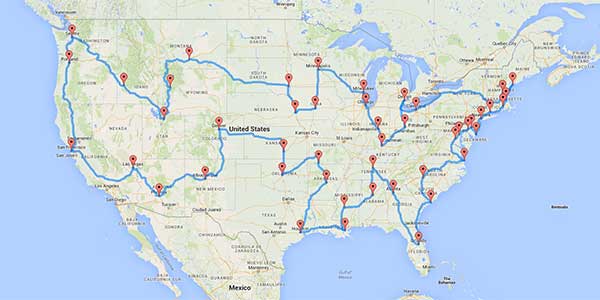 Olson's calculations didn't stop there, though. He also calculated the optimal route if you would prefer to visit major cities and one for Europe's landmarks.

So how much would this ultimate road trip set you back and how long would it take? Olson started a Reddit discussion to try to get to the bottom of it, though he admits there are a lot of factors that would effect it.

"If I were to go on this trip, I would dedicate at least 3 months to it," Olson told ABC. "I wouldn't just stop at the landmarks in the map; I would add plenty of my own, for example stopping in Los Angeles on the way through California."

Olson said it's hard to give a number for the cost, though "The current estimate is sitting at $9k for a family of 4 driving in a rented RV."

A road trip doesn't have to go through every state to be epic, though. Remember the conversation? Coincidentally, that trek yielded a pretty cool route even without going through 48 states. Photographer Brian DeFrees documented a 2001 round-country trip in this breathtaking time-lapse video:

If you were to go on a road trip across the U.S., what would it look like? Tell us about it in the comments!