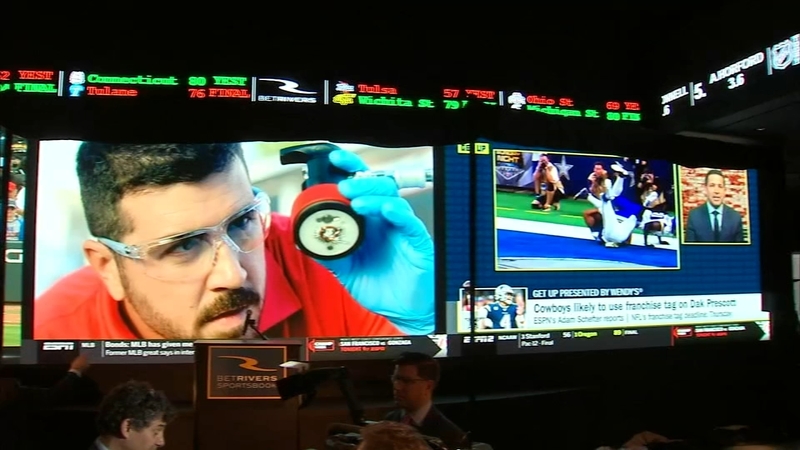 The BetRivers Sportsbook at Rivers Casino in Des Plaines will began taking bets at noon after an opening ceremony was held at 10 a.m. Chicago Blackhawks hockey great Eddie Olczyk made the first sports wager Monday.

Rivers Casino opened a room complete with a 47-foot-wide video wall earlier this year just waiting for approval from the gaming board. It's just in time for the NCAA March Madness tournament, which is one of the most popular times of the year for sports betting.

"I know people who have been driving over the border to Indiana to make sports bets there and we have seen at a casino, the more things you can offer your customers, the better the business," said Greg Carlin, CEO and co-founder of Rush Street Gaming, Rivers' parent company.

There are five betting windows in the sportsbook and a total of 30 sportsbook kiosks, casino officials said.

BetRivers will launch the Illinois BetRivers.com site and mobile app later this year.

Illinois projects to raise between $58 to $102 million a year in annual state tax revenues from sports gambling, grabbing a chunk of the business away from Indiana, which launched its sports book statewide back in the fall.

"I think it's gonna be a big success," said State Rep. Bob Rita (28th District), who sponsored the gaming bill in the legislature. "Not only a form of entertainment, but a new revenue stream for the state that's regulated and done right."