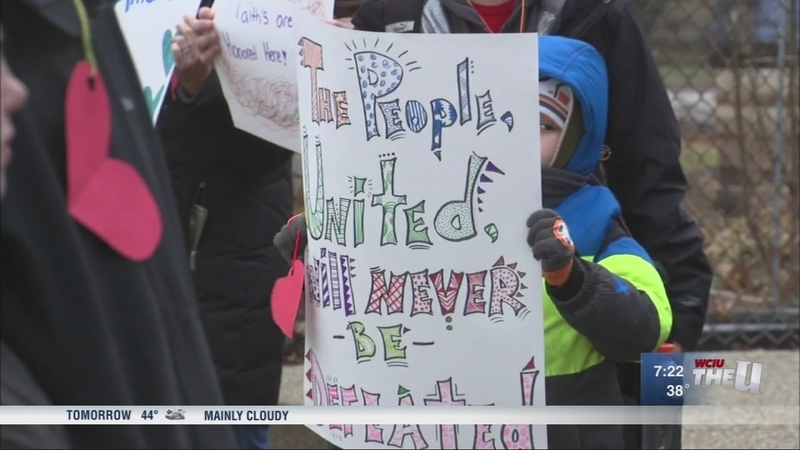 CHICAGO (WLS) -- Across Chicago and the country Thursday morning, demonstrators made a statement tied to President-elect Donald Trump and Betsy DeVos, his pick for U.S. Secretary of Education.

Wearing hearts around their necks, teachers, students and parents joined together at Boone Elementary School Thursday morning to celebrate diversity at the Northwest Side school.

"It shows unity of our school and the love we have for all of our students. We have a very diverse population, we speak 46 different languages," teacher Gail Locke said.

The demonstration there and at other Chicago Public Schools Thursday was billed as non-political. But with signs like "we have no walls," they are clearly a response to some of the rhetoric that has come from President-elect Donald Trump.

"I believe this is a show not only to the neighborhood, but also to each other, where we stand. Because my fear is the message, the rhetoric, could turn communities against each other based on nothing," said Jennifer Gledhill, the mother of a third grader at Boone.

Trump's pick for education secretary is also a concern, especially for the teachers union. Betsy Devos is a known supporter of charter schools, believing tax dollars should be diverted from public schools in favor of school choice.

"It's time to shift to debate from what the system thinks is the best for kids to what moms and dads want, expect and deserve," DeVos said.

"We shouldn't have the person running the public education department who is against public education," said Jesse Sharkey, vice president of the Chicago Teachers Union.

The fight to save public education and stand up for human and immigrant rights continued after school. As they geared up for a march, some Curie Metropolitan High School students had a direct message for Donald Trump.

"We're the future, we're the ones who are going to hold the positions next. So it's important that we take that step and make sure we're taken seriously," said Karina Martinez, a senior at Curie High School.

Curie High School students said that over the next four years, they'll continue to march and rally until they're heard.