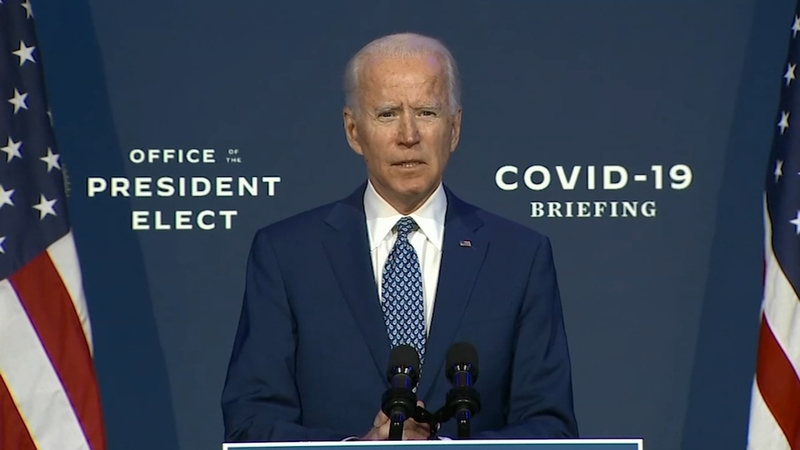 Biden and Kamala Harris virtually introduced the members of his COVID-19 advisory board during an event in Wilmington, Del.

Dr. Julie Morita, who helped lead the Chicago Department of Public health for nearly two decades and was appointed commissioner in 2015. She currently serves as the Executive Vice President of the Robert Wood Johnson Foundation.

The other Chicago connection is Dr. Ezekiel Emanuel, the brother of former Mayor Rahm Emanuel. Dr. Emanuel is an oncologist and Chair of the Department of Medical Ethics and Health Policy at the University of Pennsylvania.

Another member of the task force, David Kessler, is a graduate of the University of Chicago.

President-elect Joe Biden on Monday cheered news about the promising development of a coronavirus vaccine but cautioned Americans need to be aggressive about mask wearing and social distancing as infections continue to surge around the country.

Biden began his news conference with a direct appeal to all Americans to wear masks, a departure from Trump, who has mocked Biden and others who make a point of always wearing protective face coverings when around others. In an official move, the president-elect formed a coronavirus advisory board dominated by scientists and doctors, while Trump has had a falling out with the medical experts on his own virus task force.

The swift actions come at a critical moment in the U.S. effort to combat the coronavirus. Pharmaceutical giant Pfizer announced progress with its vaccine trial, helping send financial markets soaring. But surging caseloads, including new infections among leading figures in Trump's administration, offered a fresh reminder that the nation is still in the grip of the worst pandemic in more than a century.

The company announced it's vaccination trials have shown great promise with a 90% effectiveness in preventing the virus.

Biden said getting the virus under control his top priority.

Biden say he wants to ramp up PPE production, and make sure to deal with the disparities the virus has had on Black and Brown communities.