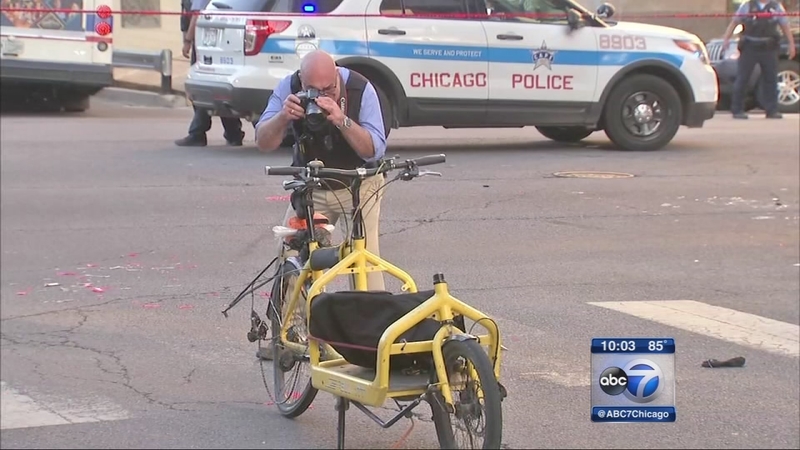 Cyclist struck and killed on Near North Side

CHICAGO (WLS) -- A cyclist was struck and killed by a bus near the intersection of Oak Street and Michigan Avenue in Chicago's Gold Coast neighborhood Wednesday evening.

Police said the open-air tour bus was traveling westbound on Oak Street when it struck a cyclist traveling north on Michigan who failed to stop for a red light around 5:30 p.m. Police say he was struck hard enough that he lost his shoes, and then was dragged by the bus.

"My stomach dropped. I was almost sick to my stomach. I was like, this is terrible, awful," said Michael Rissman, who works on the corner of Oak and Michigan.

The cyclist, identified by the Cook County Medical Examiner's Office as 29-year-old Blaine Klingenberg of Logan Square, became trapped underneath the bus's back tires and the bus needed to be lifted to free him, police said. He was pronounced dead at Northwestern Hospital.

Klingenberg appeared to have been part of a larger group of riders. No one else was injured. Officials say he is the first cyclist killed in Chicago this year; seven were killed in 2015 and eight in 2014.

In April, Mayor Rahm Emanuel announced the goal of building 50 more miles of bike lanes around the city. There are no bike lanes on the bustling Mag Mile, but it is still a popular route for cyclists.

"There's tons. You have a path right here. You have the underpass which goes over the lakefront path. So there are tons of bicyclists," Rissman said.

Chicago Trolley issued a statement on the incident shortly before 9 p.m., saying the bus in question was one of theirs.

"Chicago Trolley can confirm that one of our buses was involved in an incident this evening," the statement says. "Chicago Trolley is fully cooperating with the authorities with their investigation. Chicago Trolley takes safety as our top priority. Our thoughts and prayers go out to all involved."