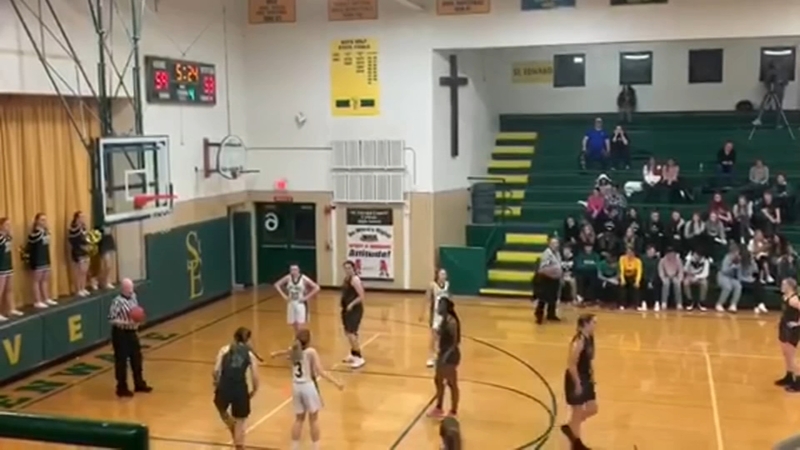 ELGIN, Ill. (WLS) -- Parents of high school girls' basketball players from Kankakee said they were the target of racist taunts as they played a team in Elgin over the weekend.

The girls' varsity basketball game is now at the center of an IHSA investigation after parents say a black student athlete was heckled because of her race Saturday at St. Edward Catholic School in Elgin. The superintendent of Saint Edward has sent a letter of apology to Bishop McNamara Catholic High School in Kankakee.

Fans say students in the St. Edward school section were yelling racially insensitive comments throughout the entire game. Parents say the students were yelling animal noises at a black student while body-shaming another girl every time she got the ball.

"Whale sounds and monkey sounds and all that, and nothing is done? That's unacceptable," said J.J. Hollis, a football and track coach at Bishop McNamara. "One of them is racially insensitive and the other one is just like, insensitive toward her body."

Bishop McNamara's principal said the racist and discriminatory behavior directed at individual players was unacceptable. He said not enough was done to protect his student athletes.

"Both of our basketball coaches are African American. So let's think about that for a second, and they are hearing monkey noises being portrayed toward their kids," Hollis said.

St. Edward Superintendent and Principal Brian Tekampe released a statement apologizing for their students' behavior, saying in part: "We condemn racism and discriminatory behavior against all people in any form. We find the behavior to be very disturbing and counters our schools values and beliefs."

"Nothing was done," Hollis said. "The kids were not put out of the gym and admins are at every game. But you are telling me they could not get those kids out of the game and under control? That's unacceptable."

The IHSA said they are investigating the incident after they received calls from concerned parents.