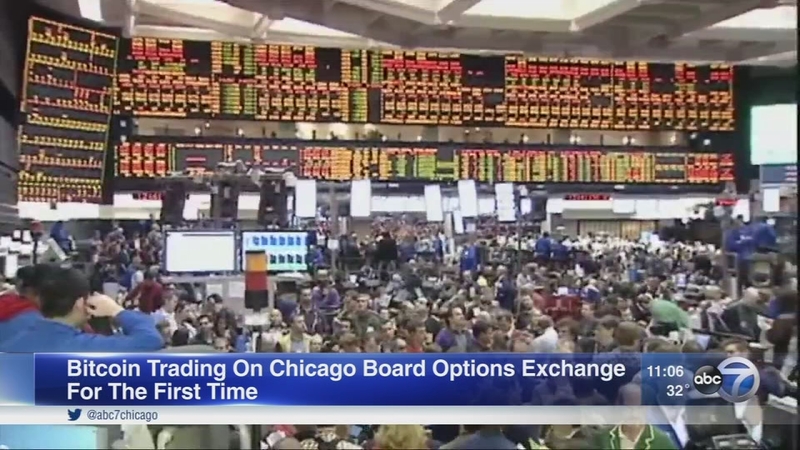 CHICAGO (WLS) -- It's a new era for investors as many hope to get in on the bitcoin game.

On Sunday, the Chicago Board Options Exchange began offering bitcoin futures, allowing investors to speculate on whether the digital currency's price will go up or down. Monday marks the first full day of trading, and it's a historic move.

Unlike traditional commodities, bitcoins aren't physical assets and unlike currencies, there isn't a central bank that backs bitcoins. Bitcoins live on computer servers.

"Bitcoin is not an asset which can be valued by any traditional financial metrics and basically financial bubbles occur throughout history and really the interesting thing about these bubbles is really what they tell us about societies at the time they occur. And with Bitcoin, I really think it chimes with the sort of collapse in confidence in traditional forms of authority and the traditional financial system," said Miles Johnson, capital markets editor at the Financial Times.

Trader Dan Deming, managing director of KKM Financial, said he has seen tremendous activity in the first 24 hours and it's a huge success.

"You're going to see a significant shift towards the digital currency so this is that first step into that world and I wouldn't be surprised in the next couple of years that we see a sovereign nation being at whatever government out there will ultimately decide that you know what, we're going to go to a digital currency, so I think that's coming," Deming said.

Traders saw about 1,800 bitcoin futures trade overnight and up to 3,000 Monday morning.

Some critics call bitcoin a bubble and a fraud.

Meanwhile the Chicago Board of Exchange tweeted Sunday that its website was receiving heavy traffic after trading began.

Due to heavy traffic on our website, visitors to https://t.co/jb3O722hoo may find that it is performing slower than usual and may at times be temporarily unavailable. All trading systems are operating normally.

Bitcoin whose price has soared roughly 1,500 percent since the start of the year, got a lift from the new activity on the Chicago exchange. It jumped eight percent in less than 10 minutes.

The CBOE futures don't involve actual bitcoin. They're securities that will track the price of bitcoin on Gemini, one of the larger bitcoin exchanges.

Another large futures exchange, the Chicago Mercantile Exchange, will start trading its own futures on Dec. 18 but will use a composite of several bitcoin prices across a handful of exchanges.

Futures are a type of contract in which a buyer and a seller agree on a price for a particular item to be delivered on a certain date in the future, hence the name. Futures are available for nearly every type of security but are most famously used in commodities such as wheat, soy, gold, oil, cocoa and, as dramatized in the Eddie Murphy and Dan Aykroyd movie "Trading Places," concentrated frozen orange juice.

The futures signal greater mainstream acceptance of bitcoin but also open up bitcoin to additional market forces. The futures will allow investors to bet that bitcoin's price will go down - a practice known as shorting - which currently is very difficult to do.

There have been other attempts to bring bitcoin investing into the mainstream. Tyler and Cameron Winklevoss, twin brothers who own large amounts of bitcoin, tried to create an exchange-traded fund based on bitcoin, but federal regulators denied their application.

The digital currency has had more than its fair share of critics on Wall Street. JPMorgan Chase CEO Jamie Dimon has called bitcoin "a fraud." Thomas Peterffy, chairman of the broker-dealer Interactive Brokers Group, expressed deep concerns about the trading of bitcoin futures last month, saying "there is no fundamental basis for valuation of Bitcoin and other cryptocurrencies, and they may assume any price from one day to the next."

Peterffy noted that if bitcoin futures were trading at that time, under the CBOE's rules those futures likely would experience repeated trading halts because 10 percent or 20 percent moves in bitcoin prices have not been unusual in recent months.

Bitcoin is the world's most popular virtual currency. Such currencies are not tied to a bank or government and allow users to spend money anonymously. They are basically lines of computer code that are digitally signed each time they are traded.

A debate is raging on the merits of such currencies. Some say they serve merely to facilitate money laundering and illicit, anonymous payments. Others say they can be helpful methods of payment, such as in crisis situations where national currencies have collapsed.