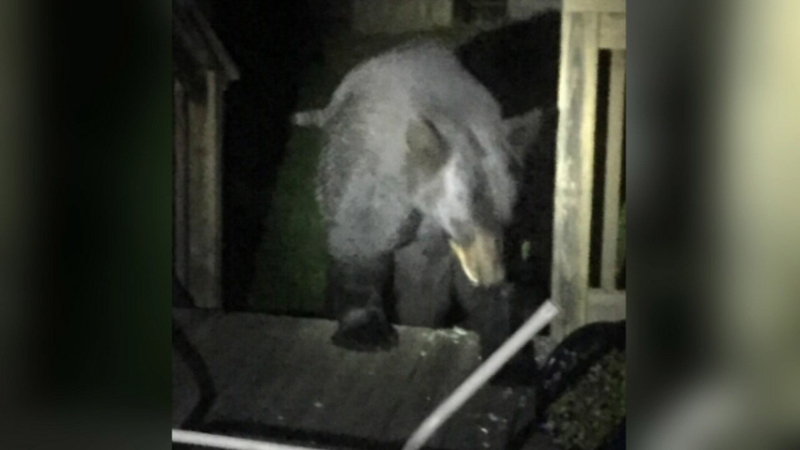 MICHIGAN CITY, Ind. (WLS) -- There is growing concern in northwest Indiana over a black bear roaming the area. It's been spotted around Michigan City and is the first confirmed black bear sighting in the state since 1871.

It's been 144 years and for that reason, they are calling this bear historical. The Department of Natural Resources doesn't want it destroyed, but safety is the number one concern. Wildlife officials said trying to capture the bear is a delicate operation.

According to wildlife experts, he's a 2-year-old black bear that weighs about 250 pounds and he has become more brazen.

"His behavior is becoming more habituated-type behavior where he is less afraid of people and getting closer to homes," said Budd Veverka.

Generally, bears feed on nuts and berries, Veverka says, but this bear has been feasting on the food in bird feeders.

Bruce Manner said this bear has been to his home three times, so he was prepared for the most recent visit last week.

Manner has several bird feeders on his property and he believes the stream behind his home is also a place the bear is searching for food, including fish.

Pete Livas is a beekeeper and he runs Panos Honey Farms. Livas says he saw the bear as it raided the beehives.

"I mean, he cleaned it out good," Livas said. He said the bear consumed 10 to 15 pounds of honey and some peanut butter.

Department of Natural Resources officials are telling people not to feed the bears. They have set several traps of bacon, sardines, honey, bird feeders and marshmallows in hopes of trapping him.

Officials would prefer not to use tranquilizers or have any physical contact with the bear. If they do capture him, they'll transport the bear back into the wild in northern Michigan.