Holiday shoppers dig for deals ahead of Black Friday 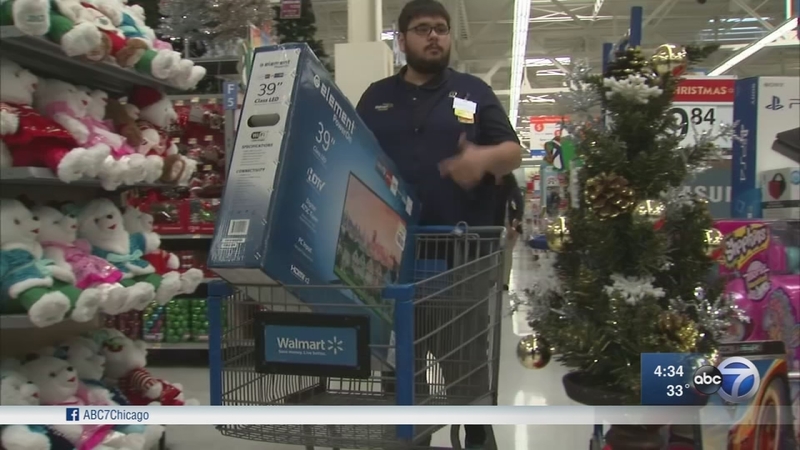 CHICAGO (WLS) -- Holiday shoppers are digging for deals as the season of the bargain gets underway and businesses are slashing prices as we approach some of the biggest shopping days of the year.

State Street is looking festive as retailers want to you shop often and certainly early. Shoppers are heeding those requests by retailers and they are out trying to snap up those deals. Some hope to get in the spirit by getting a jump on the holiday deals.

According to a survey, the majority of people are starting their shopping before Black Friday, the day after Thanksgiving, which is why it is regarded as the beginning of the Christmas shopping season.

According to the National Retail Federation, nearly 70 percent of Americans plan to shop during the Thanksgiving weekend, spending an average of $900. That's up 3.4 percent over last year.

The reason why is that retailers are already offering deals on hot items like electronics, clothing and toys. This year, Walmart is offering a majority of Black Friday deals early and online in an effort to entice shoppers.

Retail analysts predict growing consumer confidence could mean a boost in sales, neighborhood merchants are trying to get people to shop locally at small businesses like the Bronzeville Boutique, which has been doing business on 43rd Street for nearly two decades.

Even the youngest of shoppers get into the holiday spirit. Now, some of the shoppers who spoke to ABC7 said that they're really not going all out yet. They're picking up a deal here or there and said they will enjoy Thanksgiving day and the turkey and then on Friday, they will get down to business.
Report a correction or typo
Related topics:
shoppingchicagoloopthanksgivingshoppingblack friday
Copyright © 2021 WLS-TV. All Rights Reserved.
THANKSGIVING
Alcohol shortage looms: 'They don't know what's coming'
A turkey shortage may be coming
Smaller-sized turkeys may be in short supply this Thanksgiving
When to watch your favorite holiday specials on ABC
TOP STORIES
Security guard rescued after falling into 15-foot hole in Aurora
Stan Bowman out as Hawks GM, team fined $2M after sex assault probe
Lisle HS teaching assistant went on racist rant, student says
Boy killed after chasing soccer ball into Chicago Heights street
Men Kyle Rittenhouse shot can be called 'rioters,' but not 'victims'
$1M bond for man accused of beating boy to death, abandoning TX kids
2022 Grammy's: R Kelly can keep past music awards for now, CEO says
Show More
Chicago woman sentenced in kidnapping plot against romantic rival
Suspect in attempted car theft arrested after returning to scene
Teen boy seriously hurt in Loop Red Line stabbing: CPD
Tattoo artist Kat Von D closing Los Angeles shop, moving to Indiana
US issues first passport with 'X' gender marker
More TOP STORIES News