3 arrested at protest on Mag Mile on Black Friday 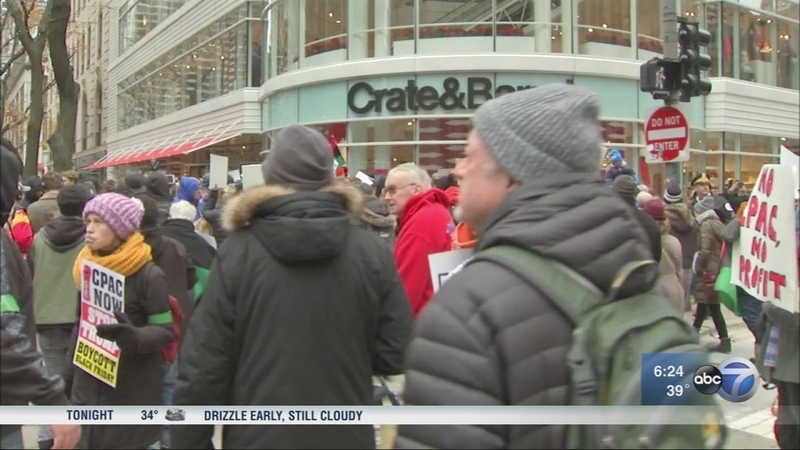 Dozens of protesters demanding a better relationship between the police and the community gathered on the Mag Mile on Black Friday.

"We're going to speak their language if it's about economics and money," Ben Silverstein, a protester, said.

Protesters gathered at the Water Tower on Michigan Avenue.

The demonstration took over the sidewalks of the north end of Michigan Avenue for several hours in one of the busiest shopping days of the year.

The effort was for the most part peaceful except when protesters trying to stop shoppers from getting into the Nike store were confronted by Chicago police officers.

Police said at least one of the three arrests on Friday was made at Crate and Barrel when one protester blocked the door to the store.

Organizers said the aim of the protest was to disrupt business as usual for retailers along Michigan Avenue.

"No one was shut down, everybody had the opportunity to accept the guests coming in and out of the store,"John Chikow, Magnificent Mile Association president & CEO, said.

Protesters gathered at Water Tower Park around 10 a.m. Demonstrators held a rally with multiple speakers and then began marching down Michigan Avenue after 11 a.m. with Chicago police units close by. Thy are protesting what call the city's failure to implement an all elected Civilian Police Accountability Council or CPAC.

"Having a thousand more cops will do absolutely nothing for safety and security in our communities. We need resources y'all," Kofi Ademola, a Black Lives Matter member, said.

On Friday, shoppers had mixed reactions to the protest.

"I thinks its okay to protest as long as everyone stays safe," Jake Harder, a shopper, said.