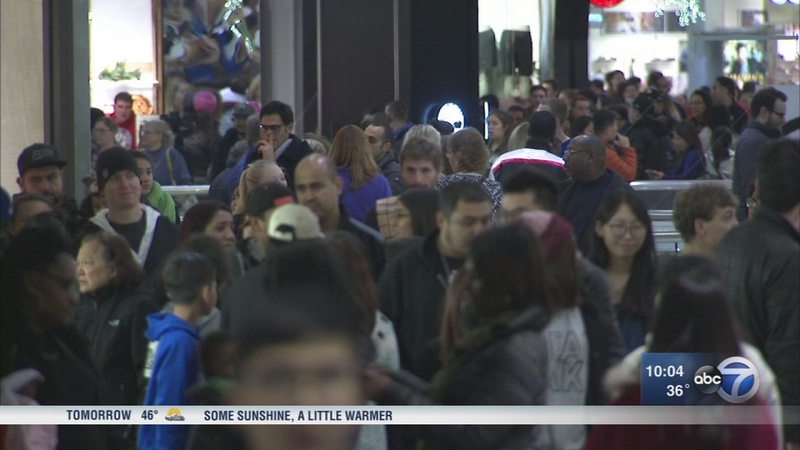 In every direction signs tempted shoppers to keep buying more.

"I'm like "maybe I can resist,'" one shopper said.

But based on the armloads of bags being hauled through the overcrowded halls of Woodfield Mall there's not a lot of holding back happening.

"I see the opportunity to save some money," Octavio Ortiz, a shopper, said.

For the list-based shopper Black Friday is a chance to check off gifts at a much lower price.

Doors opened at 6 p.m. Thanksgiving night, and it's been a non-stop shopping spree ever since. The National Retail Federation estimates six in 10 Americans will shop this holiday weekend.

Except for the traffic crawl, shoppers have to sit through to even reach the mall.

"Parking was not fun. But as far as the crowd in the mall it's been good, you just have to pay attention to where you're walking because you will walk into people, Stacey Lysoivanov, a shopper said.

Door buster deals are long over, shoppers are mostly spent. But the $655 billion dollars expected to be spent this holiday season is just starting to add up.

Target revealed that their website said record-breaking sales already, with TVs being a top seller. Target sold more than 3,000 TVs every minute in the first hour of stores opening.
Chopper7 HD flew over the Menards in Hanover Park, where shoppers were scrambling to find spaces in a jam-packed parking lot.

As for people shopping on Thanksgiving Day, shoppers said getting a head start on shopping translates to better bargains and it helped them avoid Black Friday crowds.

"I think it's more for just hanging out and the thrill the discount and the great price," said shopper Josefina Colon.

BLACK FRIDAY BY THE NUMBERS
Adobe Digital Insights says Thanksgiving Day sales online totaled $1.93 billion, up 11.5 percent from the day last year, as more people opted to stay home and shop online instead of hitting the stores. Still, that fell short of the $2 billion Adobe predicted.

Adobe attributed the shortfall to heavy discounting in the early hours of the holiday and-higher than-expected online revenue the Wednesday before Thanksgiving.

For Black Friday, online sales are expected to rise 11.3 percent to $3.05 billion, surpassing $3 billion for the first time.

Adobe data is based on aggregated and anonymous data from 22 billion visits to retail websites. The data measures about 80 percent of all online transactions from the top 100 U.S. retailers.

A large group of people was involved but police said no one called them during the fight and there were no reports of any injuries.

The mall is not commenting on the video.

Friday is when Goose Island releases its line of Bourbon County beers.

The beers are only released once a year and beer drinkers have been lined up for nearly two days to get their hands on it.

Goose Island makes the special batches by brewing their beers with liquor then letting it age for nearly a year.