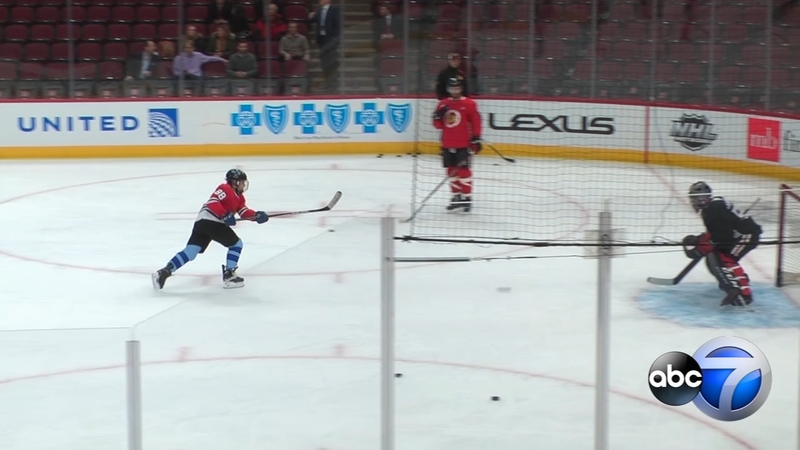 CHICAGO (WLS) -- With an assist from the Chicago Blackhawks, 11-year-old Carter Holmes skated past his cancer battle this morning. Thanks to the Make-A-Wish Foundation, the Viroqua, Wisconsin, native spent Friday morning on the United Center ice passing the puck around with the Hawks themselves.

"He wants to be just like Patrick Kane," said Tricia Holmes of her son's love for the Hawks' right wing.

So amidst all the flying pucks and screeching skates, there were two #88s on the UC ice.

"I might have to change my number," joked Kane in the locker room, adding, "I think he was a little bit better than me out there today."

Carter's mom Tricia Holmes said hockey helped save her son's life. He was hit by a puck earlier this year and the lingering injury looked suspicious to mom. That's when doctors discovered Carter had Hodgkin's lymphoma.

"When he was first diagnosed with cancer, his big fear was no more hockey--which is his life. So to be out there with the guys skating is everything to him," said Tricia Holmes.

Even though he hasn't be able to play hockey since the June diagnosis, Carter's teammates still have the defense-man's back.

"During his chemo treatments, never once was he alone. His entire team came with him," his mom said.

Now, just weeks after going into remission-and a day after being cleared to rejoin his friends on the ice-Carter's celebrating with a preseason warm up he'll never forget.

"It's going to take a little time to get back and get his muscles back. But he'll get there," his mom said.