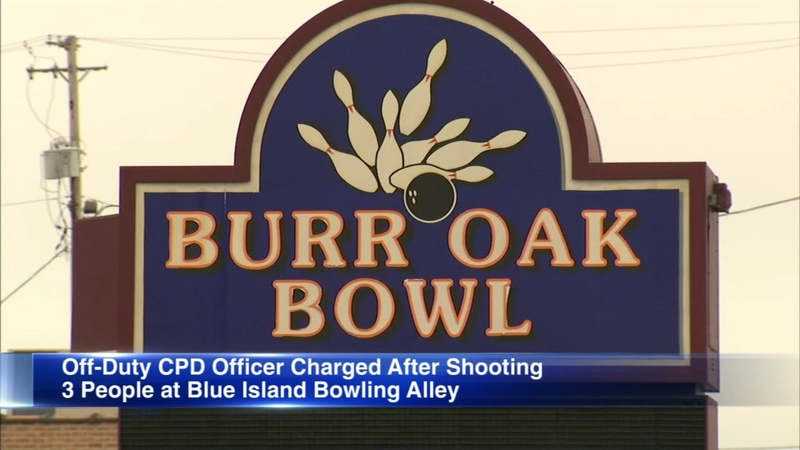 He opened fire when a confrontation with one of the victims turned physical in the restroom of the bowling alley, according to a statement from Blue Island Chief of Police Geoffrey Farr.

Tate was charged with two counts of aggravated battery with a firearm and one count of attempted murder, Farr said.

Two gunshot victims were taken to Christ Medical Center in Oak Lawn, where one person remained Wednesday with a gunshot wound to the chest, Farr said in a statement.

Another person drove himself to a hospital for a graze wound and was discharged, he said.

Tate and another person were arrested at the scene, Farr said. A weapon was allegedly recovered.

An employee who answered the phone at the bowling alley said the officer had been with a party that was doing karaoke in a lounge area. A general manager was among those wounded, according to the employee, who said the manager was struck in the hand but is now at home "relaxing."

On Wednesday, the bowling alley's liquor license was pulled amid the ongoing investigation into the shooting, the employee said.

Curtis Van Johnson II, another employee who was working at the time, said he was outside but saw the aftermath and confirmed a general manager was shot in the hand. He said another victim was struck in the upper body, while the third was grazed in the head.

Tate was arrested by Blue Island police and relieved of his police powers, the Chicago Police Department said in a statement.

He was scheduled to appear in court Jan. 14.

COPA said it was investigating the shooting with the Blue Island Police Department.

A law enforcement source said the officer was previously involved in an incident during a graduation party with his police academy classmates. He got into an altercation with a patron at a restaurant, informed that person he was a cop and then made an officer in distress call over police radio.