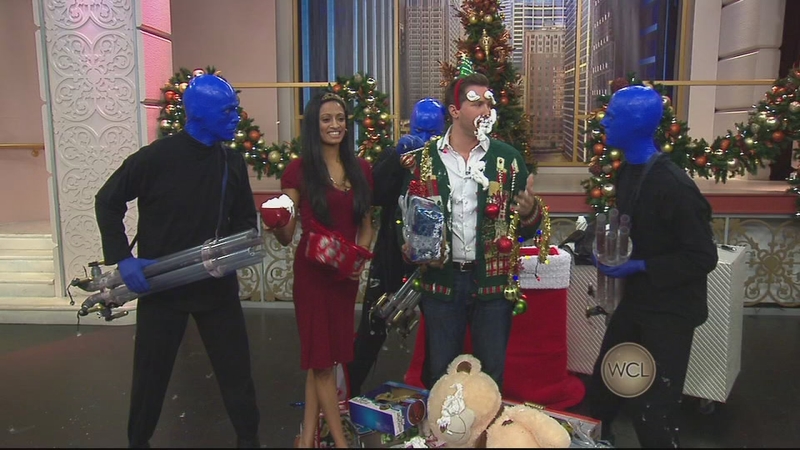 They put on a special performance while donating toys to ABC 7 Chicago's Holiday Toy Drive presented by IHOP.

Viewers at home can purchase a pair of Blue Man Group tickets for just $99 by entering the special discount code, "WINDY," at checkout.

Tickets can be purchased online at www.ticketmaster.com/bluemanchicago or over the phone by calling the box office at (773) 348-4000.

Donations for new, unwrapped toys are still being accepted by participating IHOPs through Sunday, Dec. 13.

The Blue Man Group is having four special New Year's Eve performances for kids and adults!

Families can kick off their New Year's Eve celebrations early with Blue Man Group's kid-friendly performances at 1 p.m. and 4 p.m. Thursday, Dec. 31. Children will be transformed into members of the Blue Man Group band with pre-show face painting. Other festivities include a "midnight" countdown after the show, complete with party hats and noisemakers, and a special performance of "Auld Lang Syne" by the Blue Men.

Blue Man Group will continue ringing in 2016 with additional New Year's Eve shows at 7 p.m. and 10 p.m., which include festive party hats and a celebratory pre-show toast for attendees. Guests to the 10 p.m. show will also experience a spectacular New Year's Eve countdown party. Complete with noisemakers, a midnight champagne toast, confetti drop and performance of "Auld Lang Syne" by the Blue Men, it is guaranteed to be a celebration unlike any other.