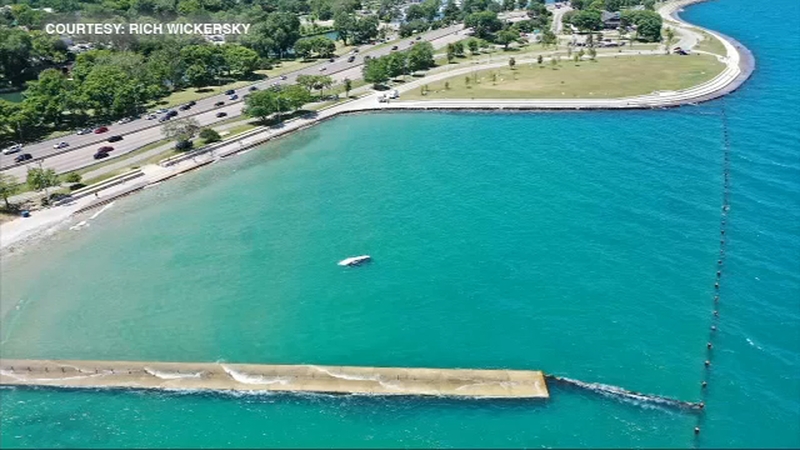 CHICAGO (WLS) -- A woman died and two other people were rescued after a powerboat hit a jetty and capsized in Lake Michigan on the North Side Thursday morning, Chicago police said.

The boat capsized at about 2 a.m. in the 2200-block of North Lake Shore Drive near Fullerton Avenue Beach, police said.

A man and a woman were rescued and are listed in good condition according to police. Divers went into the water and after a 40-minute search, they were able to locate a 27-year-old woman more than 500 yards away from the boat on the other side of the break wall.

"Because of the high water, they probably didn't see the jetty at night or at the time of day with the high water levels," said CFD Deputy District Chief Jason Lach.

The woman was underwater and unresponsive. She was transported to Illinois Masonic Medical Center, where she was pronounced dead, police said. The Illinois Department of Natural Resources identified her as Jessica Ceja.

A witness said the boat was going pretty fast when the accident occurred.

Authorities said none of the three people on the boat were wearing life preservers.

"It could have helped her a lot," Lach said. "It would have kept her floating on the surface. We would have been able to identify the exact location where she was at."

With the water levels on the lake, up two feet higher than in previous years, the Chicago Fire Department is reminding boaters to be aware of the hazards and slow down, especially with busy weekends ahead.

"Also be familiar with the waterways," Lach said. "Areas that are unfamiliar to you can be dangerous."