Chicago native to star in 'The Book of Mormon' at Oriental Theatre, where he was once an usher 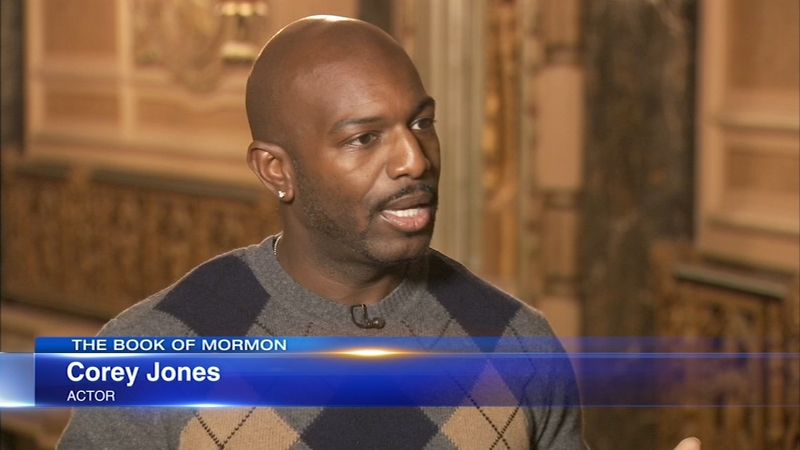 Chicago native stars in 'The Book of Mormon' at Oriental Theatre

CHICAGO (WLS) -- "The Book of Mormon" is thrilling crowds all over again here in Chicago, and you've only got through the weekend to see it.

One of the stars is hometown actor Corey Jones, who said this city is the reason for his amazing career.

Nine Tony awards makes "The Book of Mormon" a show any actor would want on their resume. Jones has that knocked, with three years touring as a villain called, "The General".

Right now he's performing at the Oriental Theatre, where he once was an usher.

Growing up in Chicago's Austin neighborhood and south suburban Dolton, Jones got the acting bug at Thornton Township High. He's tackled many Shakespeare roles with his booming voice.

"It's funny, when I was studying to do Shakespeare in high school, I didn't really care for it. I couldn't understand it. I didn't get the words, the vocabulary. But once you learn how to bring that language to your experience - and I was able to do that in grad school - it just opened up the entire canon to me.

"Musical theatre started coming along, which I didn't train for. But because I had that huge, base, baritone voice, casting directors were going, 'Hey, you could do this, that.' So it led me to this point," Jones said.

The actor said his neighborhoods helped shape his talent.

"Growing up on the West Side, the things I heard, the sights I saw, the feel of Chicago, which is unlike any other city," Jones said.

"The Book of Mormon" runs through Sunday at the Oriental Theatre.