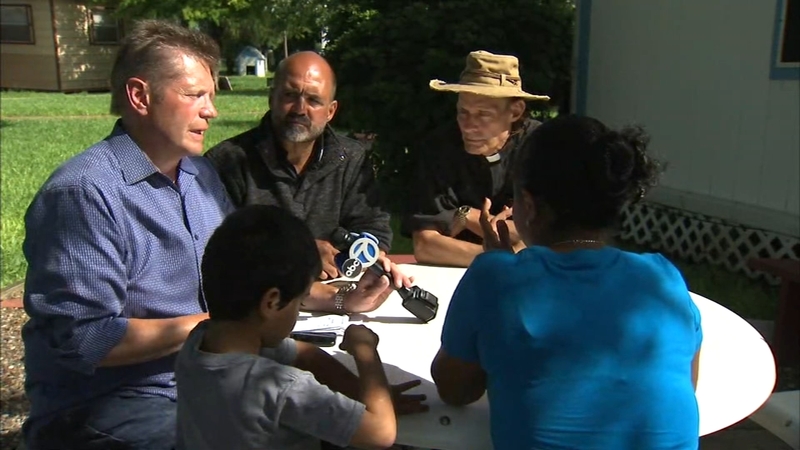 SAN BENITO, Texas (WLS) -- A group of Chicago priests spent Thursday with migrants at a long term shelter in San Benito, Texas, near the border with Mexico.

The La Posada Providencia shelter is home for migrants and those seeking asylum while they hope and wait for a better life in the United States. About two dozen people live there. They come from as far away as Russia and Africa, but most are from Central America.

Many come with scars, physical and emotional, from treacherous journeys and dangers in their home countries.

"If they stayed there they would get killed, or their children would be taken away or tortured," said Sister Margaret Mertens, La Posada Providencia.

One family's harrowing journey is emblematic of the struggles that have captured the nation's attention recently. This family's names have been changed to protect their identities.

Gabriel will turn 4 this month. He is at La Posada Providencia with his mother Jessica. Jessica and Gabriel have been on an odyssey for more than year, traveling from El Salvador through Guatemala and Mexico and now, after resenting for asylum at the border, living in the U.S.

Upon their arrival U.S. Immigration separated the family. Jessica's husband is now in detention in Washington state, while Jessica and Gabriel are in south Texas. They talk by phone, but even getting necessary documentation out of El Salvador is difficult.

It is, unfortunately, a familiar story along the border.

"Many of them, it's not a question of wanting a better life it's a question of survival," said Father Gary Graf of St. Jose Sanchez del Rio Parish in Humboldt Park.

"It really just grabs my heart and my gut, and makes me think 'This is human suffering,' especially as us, as the church, this is where the church needs to be," said Father Joseph Tito of St. Nicholas Parish in Evanston.

Jessica doesn't know if her family will be reunited and be able to stay in the U.S. From a distance, her husband tells her that if he is deported she and Gabriel must stay in America however they can.

Several Chicago priests spent the day with migrants at a long term shelter.

Sister Margaret has helped run La Posada Providencia for 25 years. It provides a safe place for asylum seekers while they await judicial proceedings and also teaches them skills.

Angel Torres, from Honduras, now works there as a cook. There are four hours of instruction in English language skills each day.

"I feel proud to raise this flag, even though it's not my home country, but I know it's meaningful for U.S. citizens," he said through a translator.

He hopes to become a citizen someday.