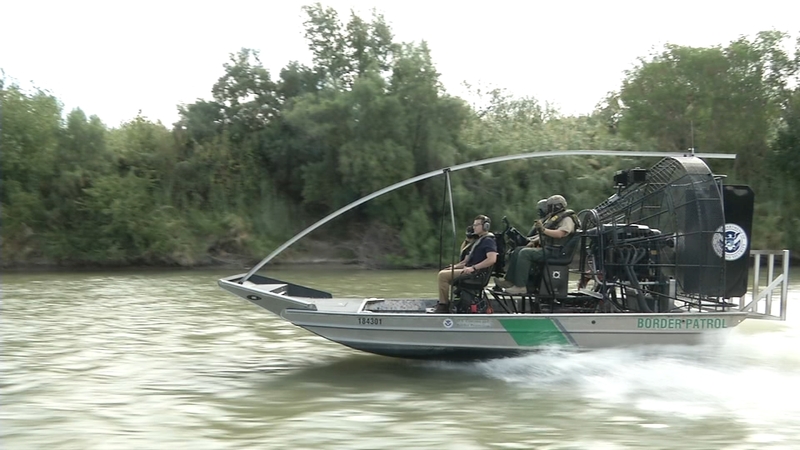 CPB patrols river at Mexico border to enforce immigration law, keeps drugs out of US

LAREDO, Texas (WLS) -- Big busts punctuate long hours of hot work with the sun beating down on Customs and Border Protection officers at the U.S.-Mexico border. The men and women at the front line are working to keep deadly drugs from coming north to the streets of Chicago.

"We are trying to be proactive and get intel with our Mexican counterparts to see-ok what are you seeing so we can start adjusting to it before it happens," said Deputy Chief Border Patrol Laredo Sector Joel Martinez

Agents and officers working at the border enforce U.S. immigration laws, and are tasked with keeping drugs and terrorists out of the country.

"We're seeing more methamphetamine, hard narcotics. As far as the transit smuggling, it's pretty much you name it they'll smuggle it through whatever type of shipment," said Assistant Port Director for Trade Operations Javier Vasquez.

Drugs are not just smuggled over in trucks or vehicles, but also on the water. Border Patrol agents are responsible for 171 miles of river to patrol in air boats.

"You just have to be alert at all times, you see the crew members with long arms there and you just hope that you see them before they are able to do something harmful to you," said Marine Unit Vessel Commander Stephen Allenburg.

He is on the lookout for people and drugs crossing these waters.

If they find people trying to cross illegally, "once they get into the water we're pretty much your hands off," he said.

"What we will do is we will monitor them to make sure that they safely make it back to Mexico. If they don't know how to swim and they get in trouble so we will make a rescue at that point," said Allenburg.

The airboats send a loud "DO NOT CROSS" warning to potential swimmers and to those "fishing" on the Mexican side. Border Patrol agents claim many work as lookouts for drug traffickers.

In Laredo, Texas footpaths and trails cover the banks of the Rio Grande River where Border Patrol agents say people on the Mexican side will pay $2.000 to $5,000 to vicious cartels for the privilege of crossing the river, the lure of a better, safer life only a football field away.

If people do cross the river they're tracked electronically, and on the ground.

"Obviously walking the trails, it's not just staying in the vehicle. Now we also have to do the walking-the trails from the neighborhoods back to the river banks," said Laredo Sector Public Affairs Office Special Operations Supervisor Raphael Garza.

There's also vigilance from above. Helicopters are the eyes in the sky for Border Patrol agents on the ground.