Boy, 14, shot while riding in stolen car that crashed into Chicago Lawn library 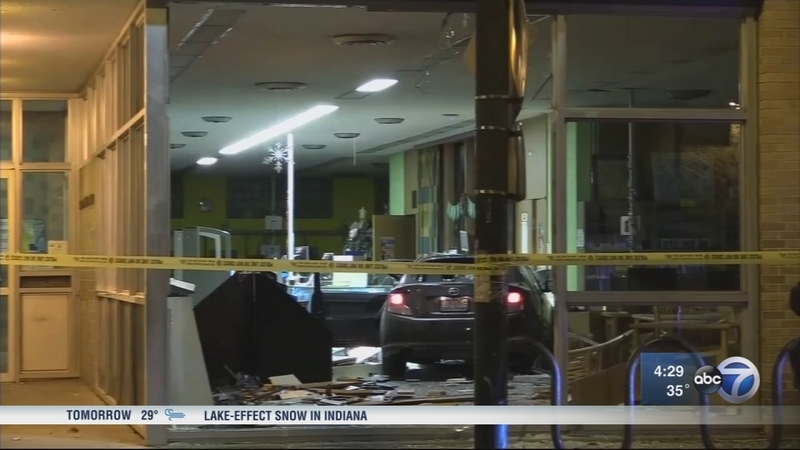 Boy, 14, shot while riding in stolen car that crashed into library

CHICAGO (WLS) -- A 14-year-old boy was shot while traveling in a stolen car late Tuesday night, police said. A girl behind the wheel ended up crashing that vehicle into the Chicago Public Library in the city's Chicago Lawn neighborhood. She was charged Wednesday in connection with the crash.

Someone in a black vehicle fired shots at a gray Scion, which police said was stolen, in the 6000-block of South Whipple Street around 11:05 p.m. The boy, who was riding in the Scion, suffered a gunshot wound to the chest.

The teen driver crashed through the massive front window of the library and landed in front of the circulation desk at the library in the 6100-block of South Kedzie Avenue, which is about a mile away from where the shooting occurred.

From meticulously cataloged and organized, to trashed, in a matter of seconds. The scene was littered with shattered glass, books, broken furniture and metal.

The boy was transported to Advocate Christ Medical Center in southwest suburban Oak Lawn, where his condition stabilized.

Investigators also looked at a red vehicle, which also had visible bullet holes.

"I'm in awe, because they keep getting younger and younger, doing crimes," said Alexis Miranda, a library patron.

A 14-year-old boy was shot while traveling in a stolen car late Tuesday night, police said.

The library was closed Wednesday as crews worked to repair the damage.

"Definitely, definitely. Money in repairs, you know. Our taxes," said John Abaica, who lives near library.

Neighbors said they were worried their library could be out of commission for much longer than they'd like.

"Now people who use it often won't be able to come in today," Miranda said.