Chicago boy, 5, home from hospital after being struck by hit-and-run driver in Chatham 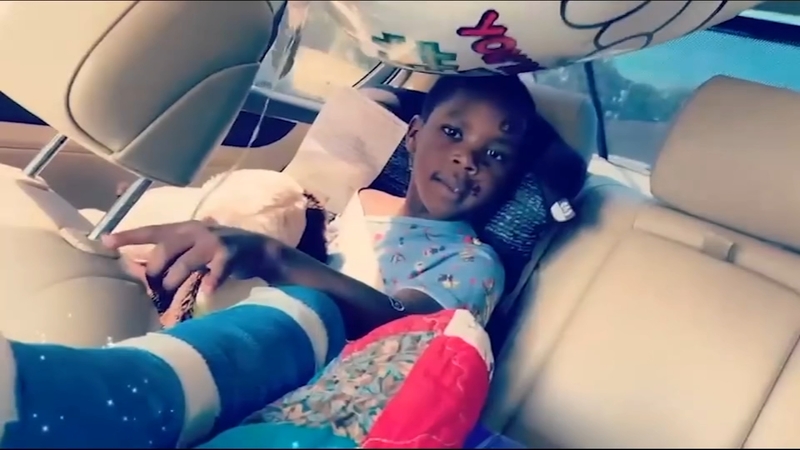 CHICAGO (WLS) -- A 5-year-old boy is out of the hospital after a road rage incident turned into a hit-and-run on Chicago's South Side last week.

Wisdom Parker, 5, is a bit shy, but upbeat - even after suffering a serious injury last week when he was struck by a hit-and-run driver.

"You think the worst immediately, so it was mass panic," said his grandmother, Afia Watts.

Watts said her family had just gotten out of a car in the 8800-block of South Michigan Avenue last Wednesday for a family picnic when Wisdom heard gunshots. They scared him, leading him to run across the street.

"He's 5. What kid, what average baby, knows gunshots and not think they're fireworks? So we have a big problem," Watts said.

Chicago police said a car and a blue SUV involved in a road rage incident that started on the Dan Ryan drove onto the Chatham block, with the driver of the SUV firing shots at the car. The SUV then hit Wisdom and drove off.

"The tire marks came all the way from his bottom pants leg up to his neck. So obviously, his head was turned," Watts said.

The car's driver stopped to help the family, but the driver of the SUV is still at large. Wisdom sustained a broken leg, scrapes and bruises. But despite his injuries, he was singing his favorite song when he came home from the hospital over the weekend.

"He could have been taken away from us," Watts said. "You don't even want to think about it. It's gut wrenching."

In fact, Wisdom's family said he didn't shed a tear until his preschool classmates made him a get well video.

"My friends from school, they made something for me and I was crying," Wisdom said.