Boy honored for helping first responders save his family 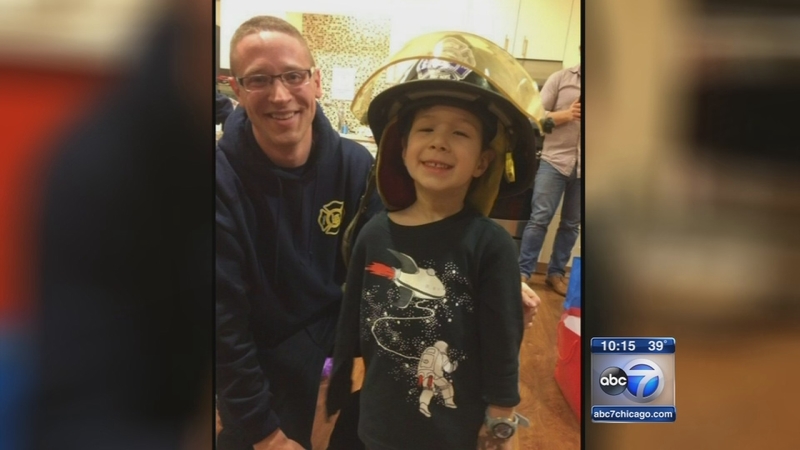 CHICAGO (WLS) -- A 4-year-old boy was honored by first responders for helping them save his family after they were in a bad crash on I-55 this fall.

Ege Pradke received the honor typically reserved for firefighters and their families, but he is considered essential to helping his family survive a crash that police say was caused by a drunk driver.

In many ways, Ege is like any other 4-year-old: he's active, outgoing and loves Batman. But to his family, he is a hero.

"He was able to guide the entire team, the rescue team through the vehicle," said James Pradke, Ege's father.

James can recall only parts of the accident, which happened in October. He, his wife and two sons were driving from Fort Leavenworth, Kan., where he's stationed as an Army major, to do volunteer work in Indiana on Columbus Day weekend.

Their van was hit head-on by a Jeep going the wrong way on I-55 outside of Bloomington. The driver of the van was later charged with DUI.

Ege was the only one conscious when emergency responders arrived and helped them despite his own injuries.

"Pointing who was sitting where, giving them our full names, providing them the information they needed to have a flawless rescue," James said.

"I got them to the hospital," Ege said.

Ege's right arm had to be amputated and he's been undergoing therapy at the Rehabilitation Institute of Chicago. He will remain three for another two to four months and will be fitted with a prosthetic arm, which he's already calling his "Transformer arm."

James says he's inspired by Ege and other kids at RIC who are taking life-altering situations in stride.

"They are truly a beacon of hope. They demonstrate what resiliency is all about and I can't help but look at him as an example for myself," he says.

On Tuesday night, Ege was reunited with those men who were first on the scene. They gave him a firefighters helmet, and he gave them inspiration and a smile.

"For a young kid, it was very surprising how calm and collected he was, with the injuries he had," said Mark Brown, a first responder. "Usually when we leave a car wreck or something, you don't see anybody again. So to come up here and see him running around with all the family and stuff is very nice to see."

Ege's dad, mom, and brother are still recovering and will be in the hospital for a couple more months, but they say the gift of being alive for this holiday season is beyond imaginable given what they've been through.