VIDEO: 5-year-old boy cries for help after being left alone on bus 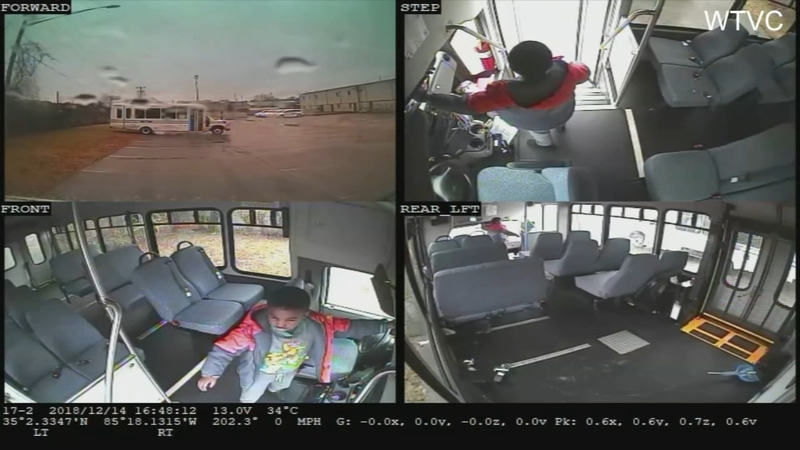 CHATTANOOGA, Tenn. (WLS) -- A Tennessee mom is furious after learning her 5-year-old son was left alone on a bus that he rides to aftercare.

Uneisha Bradford watched surveillance video from on board the bus obtained by WTVC. In it, Bradford's 5-year-old son cries out for help as he tries to figure out how he got there, and how to get out.

Her son rides the STS bus daily to aftercare at the Chambliss Center for Children. On Friday, he wasn't dropped off. Even worse, no one noticed.

Chambliss Director Philip A. Acord says both the bus driver and a Chambliss employee dropped the ball.

"The STS driver is supposed to walk through, which she did not do," Acord said.

In the video, children shuffle off the bus - all except Uneisha's son. He's sleeping on the seat only a row behind the driver.

"Our teachers are supposed to walk through... She looked under the seat and said she looked for legs and book bags and didn't see anything," said Acord.

No one checked the bus before the driver headed back to the lot.

"And then when the driver gets back to the STS and she parks her bus, she's supposed to get up and go back again," said Acord.

That didn't happen either. The video shows the driver end her shift, and leave. That's when the 5-year-old woke up in a panic.

"He's not getting back on the bus," says Bradford.

After more than 10 minutes, her son figured out how to open the doors, and got off the bus.

The video shows the boy wandering through the parking lot before finally being helped by a stranger.

It's something Uneisha Bradford says is still worrying.

"What if those people weren't out there?" asks Bradford, "Anybody could've gotten him or if he was still wandering the parking lot."

Director Acord says the Chambliss employee is now on probation. STS tells us the bus driver has been suspended. Chambliss says they've asked STS to place that driver on a different route.