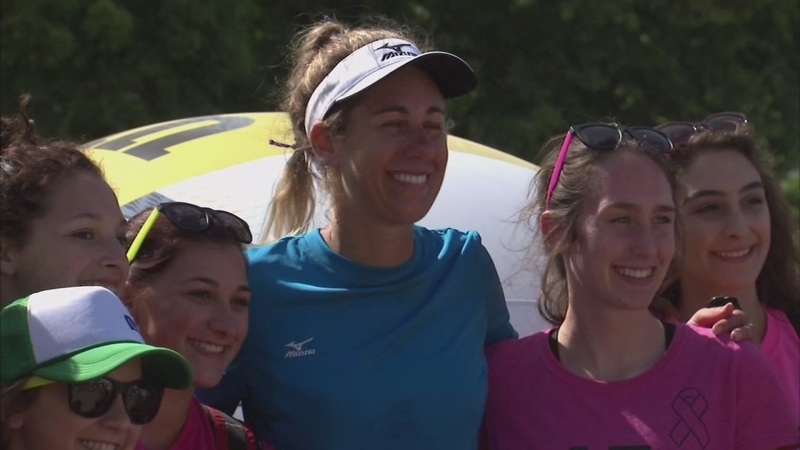 Players from volleyball teams from Richards High School and DePaul University earned a meet-and-greet with Ross - a two-time Olympic medalist - this week after they had raised money for Side-Out Foundation, which funds breast cancer research.

The young players were very excited.

"Everyone knows who she is and idolizes her, so it's like everyone is like fan girls," said Sara Murczek, a Richards junior.

"I think it's just been motivating for our team to be at the beginning of our season and meet someone who's done so much and been so successful in her sport," said DePaul junior Haley Bueser.

For Ross, who is in Chicago for the AVP Tour at Oak Street Beach, said raising money for breast cancer is an important issue for her. Her mother battled the disease for 15 years before she died on Sept. 11, 2001.

"It was relentless and we thought that several times she went into remission where we thought she was cured of it, and then it would come back even stronger. It was just devastating," Ross said. "I'm impressed by every team that shows up in their pink shirts and tells me 'We raised this amount of money and we're going to do even more next year.' It just makes me prouder to be a part of this."
Report a correction or typo
Related topics:
sportschicagogold coastbeachesbreast cancerathletes
Copyright © 2022 WLS-TV. All Rights Reserved.
TOP STORIES
Illinois reports 23,246 new COVID cases, 198 deaths
U of C officer shot student previously; man critically hurt charged
American Airlines flight turned around over maskless passenger
Bob Saget's widow reflects on comedian's last days
Restaurant accepts dog photo instead of vaccine proof, closes dining
2nd Aurora police officers dies of COVID in matter of weeks
2022 Chicago Auto Show's First Look gala expects to raise millions
Show More
Car with kids inside stolen, crashed on Northwest Side, police say
Chicago area COVID testing company sued over alleged scheme
Ghislaine Maxwell's attorney asks for new trial
Chicago Weather: Very cold Thursday, wind chills -10 to -20
Recent bike shop thefts prompt Naperville store to board up
More TOP STORIES News