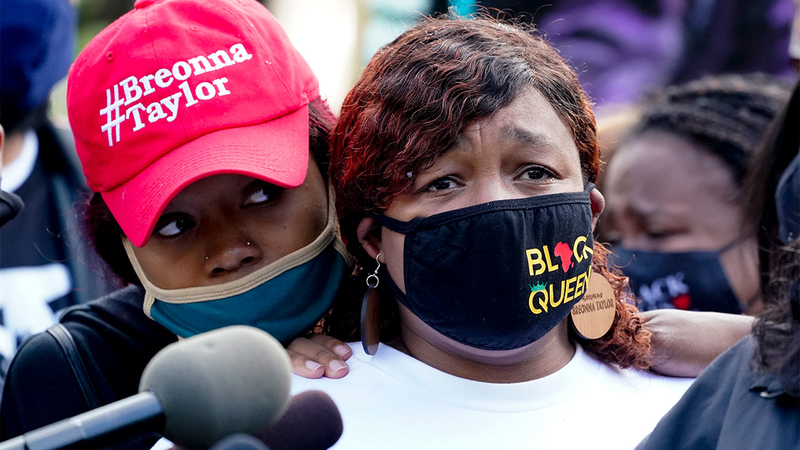 LOUISVILLE, Ky. -- Breonna Taylor's family demanded Friday that Kentucky authorities release all body camera footage, police files and the transcripts of the grand jury hearings that led to no charges against police officers who killed the Black woman during a March drug raid at her apartment.

As Taylor's mother, Tamika Palmer, stood close by in a shirt that had "I (heart) Louisville Police" with bullet holes in the heart emoji, Taylor's lawyers said they have seen the evidence, and there is much state Attorney General Daniel Cameron got wrong. They did not give specifics.

Taylor's aunt read a statement on behalf of Palmer, saying the entire justice system failed her, and Cameron was just the final person in the chain that included the officer who sought the no-knock warrant, the judge who signed it, and the police who burst into her Louisville apartment. The warrant was connected to a suspect who did not live there, and no drugs were found inside.

A car drove through a crowd of protesters in Hollywood and was chased down and attacked by people in another vehicle Thursday night.

Taylor was shot multiple times by white officers after her boyfriend fired at them, authorities said. He said he didn't know who was coming in and opened fire in self-defense, wounding one officer. Cameron, who is the state's first Black attorney general, said the officers were not charged with Taylor's killing because they acted to protect themselves.

"I hope you never know the pain of your child being murdered 191 days in a row," said Bianca Austin, reading the statement while wearing her niece's emergency medical technician jacket.

Palmer wore a mask with "Black Queen" on it and in her statement said the justice system "didn't just rob me and my family - you robbed the world of a queen." They were gathered in a downtown Louisville park protesters are now calling "Injustice Square" in front of a mural of Taylor.

An attorney for the family, Sam Aguiar, said since Cameron is done with his investigation, all the videos should be released, noting that he has seen dozens in full, most of which are not public.

Cameron "got so much wrong. We've seen so much piecemeal stuff come out throughout the case," he said.

Gov. Andy Beshear, a Democrat, has also called on Cameron, a Republican, to release what evidence he can.

Ben Crump, the attorney representing the family of Breonna Taylor, demands the release of grand jury transcripts during a Sept. 25 news conference in Louisville.

Protesters vowed to stay in the streets until the officers involved are fired or someone is charged with Taylor's killing. The grand jury indicted one officer for wanton endangerment who authorities said shot into a neighboring apartment but did not strike anyone. He has been fired.

On Friday, Cameron said through a spokesperson he understood Taylor's family's pain.

"Everyone is entitled to their opinion, but prosecutors and Grand Jury members are bound by the facts and by the law," spokeswoman Elizabeth Kuhn said in a statement.

At nearly the same time Taylor's family was decrying the handling of her case, a man accused of shooting at police during protests Wednesday was being arraigned. Two officers were wounded and expected to recover.

A not guilty plea was entered for Larynzo D. Johnson, 26, and bond was set at $1 million. Zac Meihaus, the attorney representing Johnson at the arraignment, called the streets "a war zone" when the shooting happened and said it is difficult to "pinpoint" if Johnson fired the shots in question. A prosecutor replied that a gun was recovered from Johnson, and there are video and witness accounts of the shootings.
RELATED: Officer Brett Hankison indicted, not for Breonna Taylor's death
EMBED More News Videos

A Kentucky grand jury on Wednesday indicted a single former police officer for shooting into neighboring apartments but did not move forward with charges against any officers for their role in Breonna Taylor's death.

The FBI is still investigating whether police violated Taylor's civil rights. But the burden of proof for such cases is very high, with prosecutors having to prove officers knew they were acting illegally and made a willful decision to cause someone's death.

Taylor's case - and her name - has become a rallying cry for protesters nationwide calling attention to entrenched racism and calling for police reforms. Demonstrations calling for justice for her have continued after the grand jury findings were released.

At least 24 people were arrested in the Louisville protests Thursday night, including state Rep. Attica Scott, a Louisville Democrat. Scott said she was detained minutes before a curfew started as headed toward a church that protesters were congregating in.

Scott unveiled legislation recently that would ban the use of no-knock search warrants in Kentucky. The measure, called Breonna's Law, also would require drug and alcohol testing of officers involving in shootings and deadly incidents and require that body cameras be worn during the execution of all search warrants.

A grand jury has indicted a fired Kentucky police officer on criminal charges in the Breonna Taylor case - but not for her death. ABC News' Dan Abrams explains those charges.

Scott stayed in jail overnight, then after getting out came to "Injustice Square" to stand with Taylor's family and supporters.

"It's clear that this alphabet soup of law enforcement that's here in Louisville, both local, state and federal law enforcement, are preparing for battle, for war against the people they are supposed to protect and serve," Scott said.

The curfew in Louisville will continue through the weekend, and the governor called up the National Guard for "limited missions."

Police eventually pulled back late Thursday after negotiating with demonstrators to end the protest. Authorities alleged the protesters broke windows at a restaurant, damaged city buses, tried to set a fire and threw a flare into the street. There were other protests in cities across the U.S., but no major problems were reported.