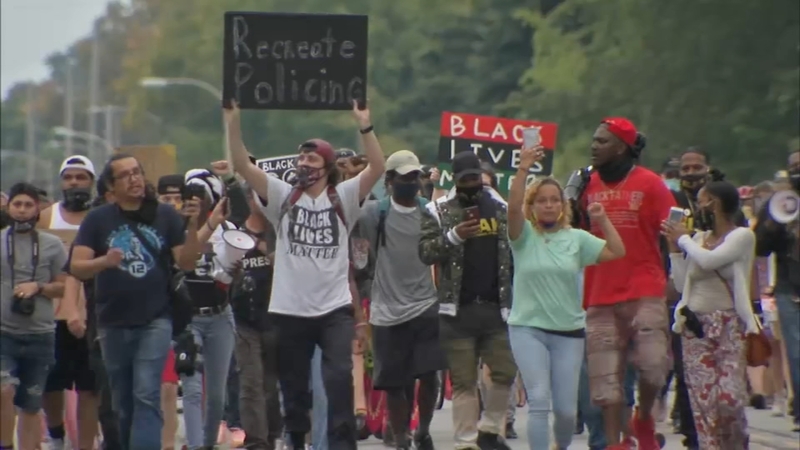 KENOSHA, Wis. (WLS) -- At a rally and march in Kenosha Thursday, activists said instead of feeling discouraged by the Breonna Taylor charging decision, they're more energized than ever to get justice for Jacob Blake.

A crowd gathered inside a Kenosha church for a rally hosted by Rev. Jesse Jackson. He told them not to lose hope.

"We must use our vote to put officials in office who are accountable to sense of justice," Jackson said.

Jacob Blake continues to recover in the hospital. He was shot seven times in the back last month by a Kenosha police officer responding to a call about a domestic incident. The shooting left him paralyzed from the waist down.

His uncle Justin Blake has been leading the fight for the Kenosha police officer who shot him to be charged.

"We are not leaving Kenosha until we get an indictment and conviction of this officer who shot an unarmed black man that had no weapon, in front of his children, seven times in the back," Justin Blake said.

His family said they are keeping information about the fallout from the Taylor charging decision away from Blake so he can focus on his health. They reached out to the Taylor family Wednesday with their disappointment.

"My brother talked to their family yesterday and sent out our love from the Blake family," Blake said.

Before the crowd gathered at the church they marched through the streets of the city, pushing for charges. They said what happened in Kentucky is fueling their steps.

"It makes us realize that this is going to be a long hard fight and so buckle up," said Gary Wortham, demonstrator.

"I am still encouraged as long as we keep bringing people together," said Andrea Parise, demonstrator.

Activist Portia Bennett said they're going to continue to cause "good trouble."

"We stand in solidarity with Louisville, Kentucky, and the case of Breonna Taylor, because we don't agree with happened down there, and that's why we are going to continue this this fight; so we don't get the same exact treatment," she said.