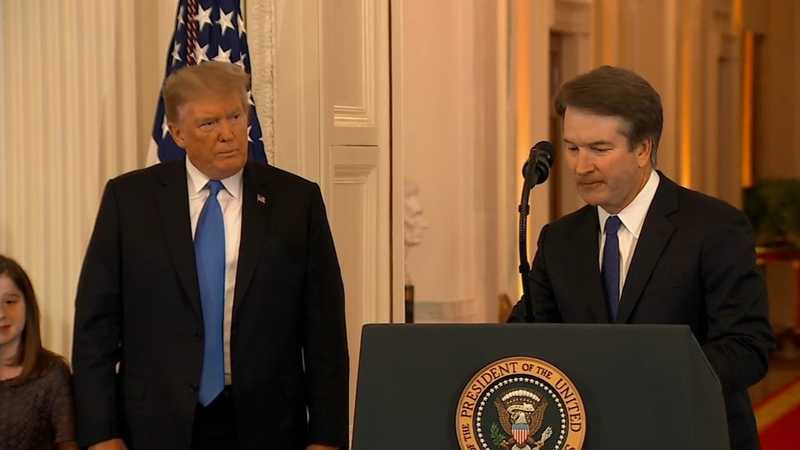 WASHINGTON, D.C. -- A woman accusing Judge Brett Kavanaugh of sexual misconduct more than 30 years ago came forward publicly Sunday, detailing her allegations about the Supreme Court nominee in an interview with The Washington Post.

The paper said Christine Blasey Ford, a professor in California, reached out to the Post in July as Kavanaugh's name appeared on short lists to replace Justice Anthony Kennedy, but she opted not to speak with the Post on the record for weeks. As her private outreach to California Democratic Sen. Dianne Feinstein became public over the past week, she decided to go ahead and speak out herself, Sunday's report said.

"Now I feel like my civic responsibility is outweighing my anguish and terror about retaliation," Ford told the Post.

Ford said she kept silent about the alleged incident until she was in couples' therapy with her husband in 2012. Her husband, Russell Ford, recalled to the Post that she talked during their 2012 sessions about the incident and said she had mentioned Kavanaugh's last name and that he was a federal judge who might be on the Supreme Court eventually.

In a statement on Friday, Kavanaugh denied the reported allegations that while at a party during his time in high school, he pushed a woman into a room, locked the door to the room along with another male and tried to take off the woman's clothes.

"I categorically and unequivocally deny this allegation. I did not do this back in high school or at any time," his statement said.

Going through the allegation she had made in her letter, Ford told the Post that Kavanaugh and his friend were drunk at the time and that he put his hand over her mouth when she tried to scream.

"I thought he might inadvertently kill me," Ford said. "He was trying to attack me and remove my clothing."

According to the Post, Ford is a professor at Palo Alto University who teaches in a consortium with Stanford University.

Ford said she was able to escape Kavanaugh and his friend, whom she identified as Mark Judge. Judge denied the allegations in an interview with The Weekly Standard, a conservative publication, after The New Yorker detailed them on Friday.

Citing unreleased records from Kavanaugh's official work over the years, Democrats have called for a delay in considering his nomination. The Senate Judiciary Committee has set its vote on his nomination for this coming Thursday.

Feinstein issued a statement on Sunday afternoon in support of Ford and calling for the FBI to investigate the matter before the Senate advances Kavanaugh's nomination.

"I support Mrs. Ford's decision to share her story, and now that she has, it is in the hands of the FBI to conduct an investigation," Feinstein said. "This should happen before the Senate moves forward on this nominee."

Iowa GOP Sen. Chuck Grassley, the committee chairman, said in a statement following the report that the timing of the allegations shortly before the committee's scheduled vote was "disturbing."

"It raises a lot of questions about Democrats' tactics and motives to bring this to the rest of the committee's attention only now rather than during these many steps along the way," Grassley said. "Senator Feinstein should publicly release the letter she received back in July so that everyone can know what she's known for weeks."

New York Sen. Chuck Schumer, the chamber's top Democrat, called for Grassley to postpone the vote "until, at a very minimum, these serious and credible allegations are thoroughly investigated."