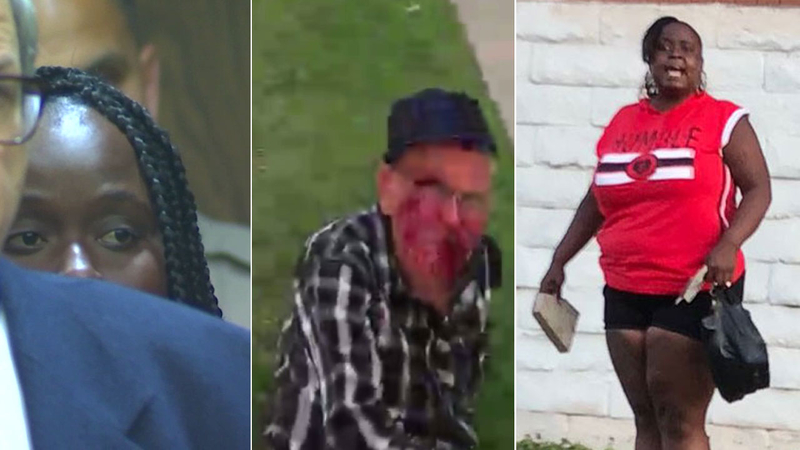 LOS ANGELES -- A woman charged with attempted murder and elder abuse for the beating of a 92-year-old man in Willowbrook has pleaded not guilty.

She appeared in court, and prosecutors asked that bail be set at $1.125 million, the DA's office said.

A woman has been arrested in connection with a brutal beating of a 92-year-old man in Willowbrook, sheriff's officials said.

The felony complaint includes special allegations that Jones personally used a deadly and dangerous weapon, a brick, during the commission of the crime and that she committed great bodily injury upon the victim, the DA's office said in a statement.

Additionally, the charging document alleges that Jones was previously convicted of making criminal threats in a 2017 case.

Jones faces a maximum sentence of 29 years in state prison if convicted as charged.

Jones is accused of attacking Rodolfo Rodriguez on the Fourth of July near the corner of 118th Street and Central Avenue.

A witness, who recorded the aftermath of the attack, said Rodriguez was walking on the sidewalk and passed a woman, who got angry. The witness said the woman pushed him and struck him in the head with what appeared to be a brick of concrete.

Rodriguez said he did not do anything to provoke the attack. Three to five young men were also present during the incident. Sheriff's officials are investigating their potential role in the assault.

The 92-year-old man who was beaten with a brick in Willowbrook says he does not resent his attacker and wishes God's forgiveness upon her.

Authorities are also looking into whether it was a potential hate crime. Witnesses told authorities they heard one of the attackers tell Rodriguez to "go back to Mexico." Investigators said so far that has not been substantiated.

While Rodriguez was getting assaulted, he could only hear people's voices but couldn't make out what his attackers were saying, he said.

He said he is thankful that Jones was arrested, but he does not harbor resentment toward her or the other men. He said the law should take its course with regard to punishment.

"May God forgive her for what she did to me," he said, adding that he wishes God's blessings on the woman as well as himself.

Rodriguez added that he is grateful for the support he's received from the community and thanked the people who have helped him during this difficult time.

Rodriguez, who is a legal resident of the United States, travels back and forth between Mexico and the U.S. He was visiting family members in Willowbrook when the attack occurred.