Video shows Chicago police officers pulling two women from their car and throwing them to the pavement at the Brickyard Mall parking lot.
WLS
By Chuck Goudie and Barb Markoff, Christine Tressel and Ross Weidner 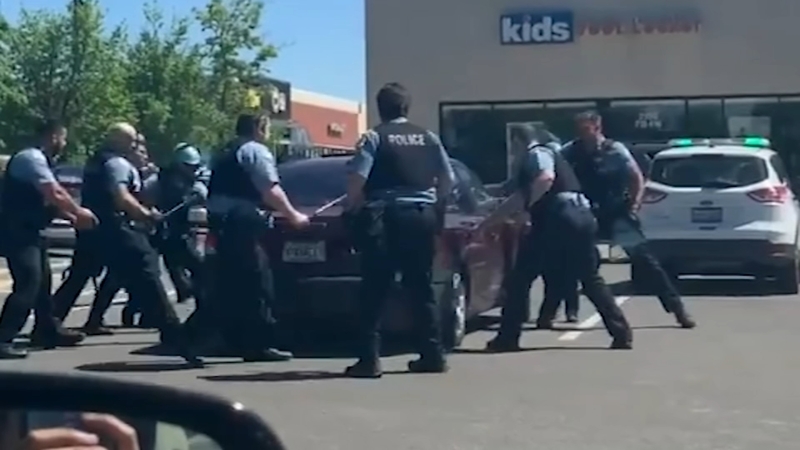 CHICAGO (WLS) -- Several Chicago police officers are under investigation after videos surfaced showing two women being pulled from their car and thrown to the ground Sunday at the Brickyard Mall on Chicago's Northwest Side.

Now under investigation by the Civilian Office of Police Accountability, the arrest took place the day after widespread violence and looting in Chicago. It also happened less than one week after George Floyd's death in Minneapolis.

A witness said several young men had just tried to loot a store then scattered at the sound of sirens. He said arriving police pointed to a car driven by Tnika Tate.

"Twelve to 15 police officers that just start bashing and hitting my vehicle with their batons," Tate said. "They had their guns drawn."

"I was trying to get out with my hands up, they continue to break the window, and before you know it I was being pulled out of the vehicle - pulled by my hair after vehicle," Mia Wright said. "The officer grabbed me. I had my hair tied in a bun. He grabbed me by the top of my bun and pulled me out of the vehicle. And that is when they threw me on the ground, and he proceeded to put his knee in my neck."

In the backseat were other family members, including Mia's mother.

"They grabbed, and pulled me out by her hair and had her on the ground. And I'm like, 'What are you doing to my child over there?'" Kim Woods said. "I felt helpless that I couldn't get over there and help my child. When I heard that they had his knee on her neck, first thing I could think about was Floyd."

Chicago Mayor Lori Lightfoot said she's seen the video and tweeted that "while one video does not always show the entirety of an incident, COPA is investigating to ensure a complete picture of what happened."

CPD does not tolerate misconduct of any kind. I have viewed video depicting officers pulling two women out of a car in Belmont Cragin. While one video does not always show the entirety of an incident, @ChicagoCOPA is investigating to ensure a complete picture of what happened.

If any wrongdoing is discovered, officers will be held accountable. Anyone who feels they have been mistreated by a CPD officer is encouraged to call 311 and file a complaint with COPA.

The key question concerns a pressure-point tactic executed by one officer, according to former federal prosecutor and ABC7 legal analyst Gil Soffer.

"That's a carotid artery restraint and under police guidance, Chicago Police Department guidance - that's deadly force," Soffer said. "And that can only be used as a last resort."

"I worked for the City of Chicago for 38 years as a school clerk for the Board of Education. How can I talk to my kids about the police being friendly?" Woods said.

The family in that car will be with several community leaders Thursday morning for a news conference to "announce their plans to get justice from a Chicago Police Department that demonstrates no respect or regard for the lives of black people."

The Chicago Police Department strives to treat all individuals our officers encounter with respect. Anyone who feels they have been mistreated by a CPD officer is encouraged to call 311 and file a complaint with the Civilian Office of Police Accountability, who will investigate allegations of misconduct. Misconduct on the part of our officers will not be tolerated.