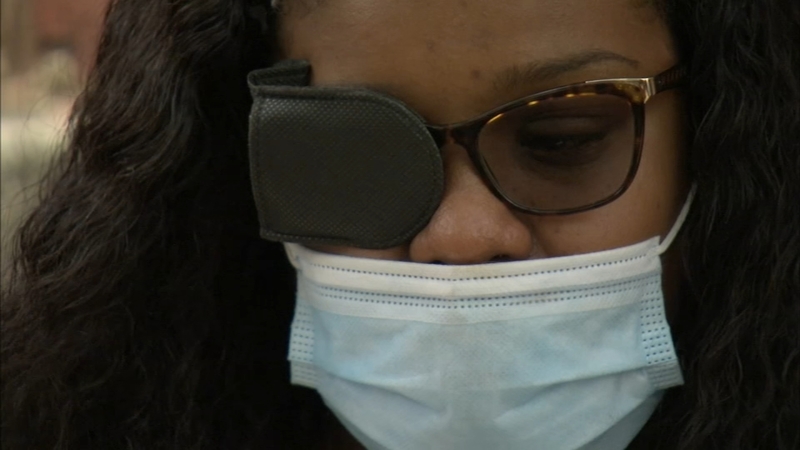 CHICAGO (WLS) -- Charges have been dropped against a woman involved in a violent confrontation involving police outside Chicago's Brickyard Mall.

Cell phone video showed officers smashing into a vehicle and pulling Mia Wright out of the vehicle by her hair.

Three officers were stripped of their police powers.

Wright, the woman seen dragged by police officers from her car outside the Brickyard Mall, is now free of the disorderly conduct charges against her.

Wright and her attorney said they are pleased with the outcome.

But Wright said as a result of the incident, she is now partially blind and the future she had been working toward now hangs in the balance.

The charges were dropped Monday, but Wright said the trauma from the incident, has not gone away.

"Since the experience I've been embarrassed, having nightmares, issues now I am still dealing with. I can't see out of my right eye; that I still deal with everyday," Wright said.

Wright, an aspiring EMT and paramedic, said she is not sure she can attain her career goals, and her everyday life has changed since that day.

"At this point, I'm not able to drive. I have to have my cousin drive for me because it's hard to see with one eye, trying to drive and learn how to drive with one eye," Wright said.

On May 31, Wright and her cousin were parked at the Brickyard Mall when officers approached and pulled them out of the vehicle.

Cell phone video captured officers smashing out a car window, pulling Wright out and one officer putting a knee on Wright's neck for what she estimates was two minutes.

"What happened to her should absolutely never have happened on top of that they charged her with a criminal case and that has been dismissed," said Nenye Uche, Wright's attorney.

Wright's attorney praised the city for doing what he called "the right thing."

"I think this one speaks for itself. I think watching the video, assessing and evaluating the entire circumstance, it's obvious that it's baseless," Uche said.

Despite the milestone, Wright's lawyer said the next step will be to demand that the city to pay for her medical bills and the ongoing emotional distress.

In addition, Wright wants charges brought against officers involved who have since been relieved of their police powers.

"I do want charges brought against the officers. They really messed up my entire life for what they did to me. I need something to be done about it," Wright said.

The Civilian Office of Police Accountability said its investigation is still ongoing.