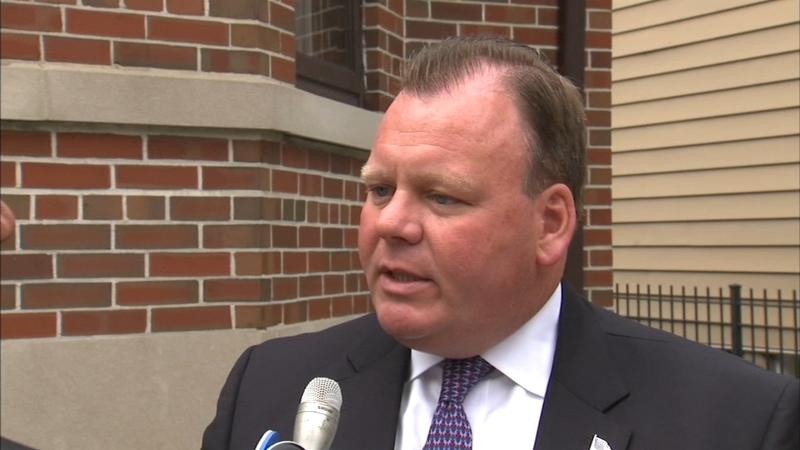 CHICAGO -- The president of a Bridgeport bank for years directed a longtime employee to alter its books as part of a larger criminal conspiracy to falsely make it look like now-Ald. Patrick Daley Thompson (11th) made payments on a loan there, court records allege.

Now that worker, Alicia Mandujano, has become the first person to plead guilty as a result of the massive investigation that has swirled for years since the failure of Washington Federal Bank for Savings and the death of its president, John Gembara, both in 2017.

Mandujano pleaded guilty during a virtual court hearing Wednesday to a conspiracy to commit offenses against the United States. She admitted that, at Gembara's direction, she helped cover up the embezzlement of $66 million from the bank founded in 1913.

The new allegations concerning Thompson are included in Mandjuano's 27-page plea agreement. It alleges that Thompson received three loan distribution checks from the bank between 2011 and 2014. Twice, at Gembara's direction, it said Mandujano gave Thompson checks "that were in excess of the principal amount on Thompson's note."

On all three occasions, it said, Thompson picked up the checks from Gembara at the bank.

Then, between 2012 and 2017, when Thompson did not make monthly loan payments, Gembara instructed Mandujano to alter records to make it appear as though he had, "including by advancing interest payments and then adding those amounts to the principal balance of his loan," according to the plea agreement.

Thompson was elected to the City Council in 2015.

"The government's summary in Ms. Mandujano's plea agreement is highly misleading because, as they well know from the interview reports, Ms. Mandujano has said that Mr. Thompson would have no way of knowing that any false entries were being made on the books of Washington Federal," Chris Gair, Thompson's defense attorney, told the Chicago Sun-Times.

"Furthermore, I would point out that Mr. Thompson is not accused of any wrongdoing with respect to the Washington Federal loan."

Mandujano has long been cooperating with investigators looking into the bank's failure, a move that will likely earn her a break at sentencing. Meanwhile, at least two other former bank employees are expected to plead guilty ahead of Thompson's trial, which is set for Feb. 4. Mandujano's name appears on the prosecutors' list of potential witnesses.

"This is a classic case of powerful men, whether in the movie, television or banking industry, exerting control over women who had no say," Mandujano's attorney Victor Henderson said. "The millions of dollars that were stolen went to men. The bank tellers and low level employees who were women simply got to keep their jobs. Their alternative was to get fired for failing to follow orders."

Thompson is charged with filing false income tax returns and lying to the Federal Deposit Insurance Corp. His indictment says he received three payments totaling $219,000 from the bank between 2011 and 2014, through a purported loan and other unsecured payments.

The feds say he made only one payment on a loan but failed to pay any interest. Then, after federal regulators shut down the bank in December 2017, the FDIC tried to collect the money from Thompson. The alderman allegedly lied about how much he owed.

The indictment also alleged that Thompson claimed in federal tax returns for the years 2013 through 2017 to have paid more than $170,000 in mortgage interest. Washington Federal allegedly sent IRS forms to Thompson that falsely accounted for mortgage interest payments.

"The indictment is also misleading because, as the government well knows, the total amount of Washington Federal interest supposedly deducted in error was $50,000," Gair said. "As a result of those deductions over five years, Mr. Thompson, according to the government, underpaid about $3,000 a year, which is less than 2% of the taxes he owed."

Regulators shut down Washington Federal less than two weeks after Gembara was found dead, seated in a chair, a rope around his neck, in the master bedroom of the $1 million Park Ridge home of his bank customer and friend, Marek Matczuk, who also now faces federal charges.

Mandujano had been working at an ice cream store when she responded to a newspaper ad for a teller's position at the Bridgeport bank in the summer of 1990. She was interviewed by Gembara's sister, Janice Weston, and then trained by Gembara's younger brother Robert, who has since retired as an Illinois State trooper.

Mandujano worked her way up to become John Gembara's secretary and later worked as a loan servicer.

"I always reported to John Gembara," Mandujano said during a deposition with attorneys for the Federal Deposit Insurance Corp., which had to cover $90 million in deposits from the bank's embezzlement scheme.

During the deposition on April 9, 2019, Mandujano admitted to falsifying bank records, describing how Gembara ordered her to copy and paste the signature of attorney Robert Kowalski, who has also been charged, on numerous bank documents.

Q. And was anybody else at the bank aware that you were doing this?

Mandujano: No. Only John and myself.

Q. And nobody in the audit department or the accounting department?

Mandujano: No. uh-uh. No, I had to close my door in my office and close the blinds and make sure - lock my door.

Q. Who told you to do that?

Mandujano: John Gembara. Nobody was allowed to see me, I guess, do this. He didn't want nobody to find out I was doing it.

An indictment alleged that Mandujano played critical roles in the embezzlement scheme by making false entries into bank records, using bank funds to pay real estate taxes for customers and then increasing the values of the customers' loans, providing falsified records to federal bank auditors, and transferring money to Kowalski, Thompson and other bank customers who have been indicted in embezzlement scheme.

Mandujano and her husband got eight mortgages from Gembara's bank, according to records filed with the Cook County Clerk's office. The bank also helped finance a sports bar her husband had owned, according to her deposition.