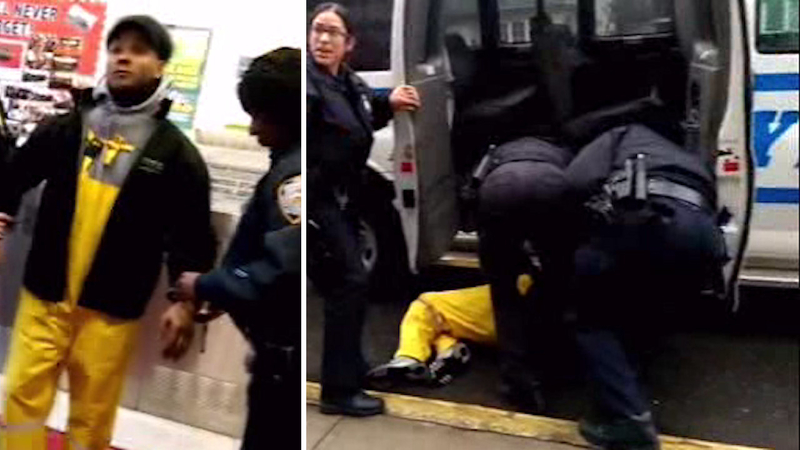 NEW YORK -- A father was seriously hurt, he says, for standing up for the rights of his second grade son at school.

The boy was allegedly told he couldn't go the bathroom and stayed in his soiled pants all day.

The angry dad confronted the teacher and that's when the trouble started.

Vincent Nemorin was put in handcuffs after questioning the second grader's teacher at PS 193 Wednesday about why his son was allegedly left sitting in feces for hours.

Yumi says she never imagined a simply discussion would end with her husband in handcuffs.

At one point he slips trying to get in the police vehicle.

Police say the teacher told them she felt threatened.

Parents say it never should have escalated to this.

"His father approached a teacher just to verify why she didn't let him use the bathroom. He gets arrested for asking a simple question. It's not her against him, it's her against us. Could've happened to any of our kids," said Stacia Gregorio, a parent.

"We are afraid, we are very afraid. We can come to the school and any issue I'm up and if you're going to go and address it, you were going to be arrested," said Maryam Genik, a parent.

Nemorin is the school's PTA treasurer.

Parents believe his arrest was retaliation because he demanded more resources for students from the principal.

"We refuse to have a knucklehead principal with the help of the police coming into our communities treating us and our kids as future criminals," said Fritz Vilton, a parent.

A Department of Education spokesperson said in a statement: "We take this allegation seriously, and are investigating the matter. Ensuring safe and supportive environments in all our schools is critical, and there is additional support being provided to the school to address parent concerns. We will continue to work with the school community to ensure the school is meeting their needs."

Eyewitness News could not reach the principal or teacher directly for comment.

Nemorin now faces charges of menacing and harassment. He was arraigned in court Thursday night, where several fellow parents showed up to support him.

He has an order of protection against him so Nemorin will not be allowed to drop his son off at school or pick him up until the matter is settled.
Related topics:
educationnew yorkteacheru.s. & worldfather chargedstudents
Copyright © 2022 WABC-TV. All Rights Reserved.
TOP STORIES
Storm forecast to drop 1-3 inches of snow on Chicago area | Radar
School Closings: Chicago Area Complete List
6 found dead inside Milwaukee home, authorities say
Family demands justice after 23-year-old woman found dead after date
Several wounded in shooting in German city; gunman dead
Woman finds $3M lottery prize in her spam folder
Woman killed in 'targeted ambush' at her birthday party in CA
Show More
22 shot, 5 fatally, in Chicago weekend violence
Little Village mourns girl, 8, killed in shooting
5 tax changes that can boost your refund this year
COVID mandate draws protestors rallying against proof of vaccination
$6M worth of cocaine laced with fentanyl seized in Wisconsin
More TOP STORIES News