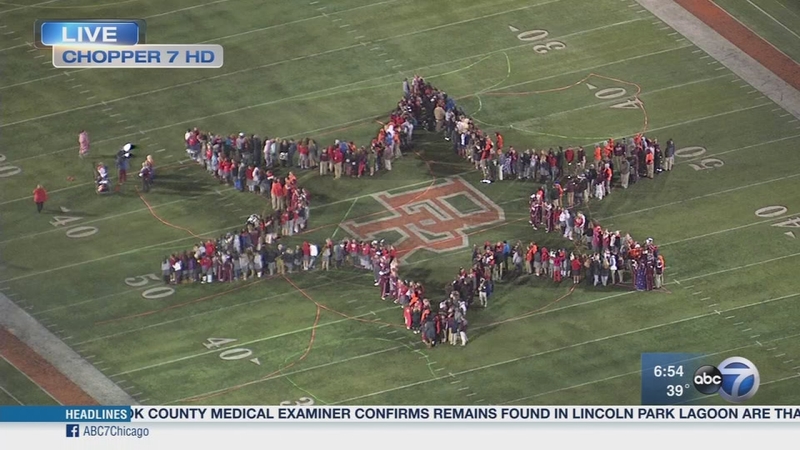 Brother Rice:
-The Brother Rice all alumni reunion is Friday, November 10, at the school.
-Brother Rice has more than 20,000 alumni.
-Brother Rice was named one of the top 50 Catholic high schools in the country for five years in a row by the Acton Institute (in Grand Rapids, MI) in the areas of academic excellence, Catholic Identity and Civic Education.
-Brother Rice is a nationally recognized "Blue Ribbon School."
-Brother Rice had six Catholic League championships in 2017.

Mother McAuley:
-First Catholic school in Chicago and the pioneer in educating young women
-More than 26,500 alumnae
-100 percent of our past 6 graduating classes were accepted into college
-2016 State and National Championship volleyball team
-19 athletic state championship titles
-Catherine Rogers '18 earned 36 (perfect composite) on the ACT - less than 1% of students who take the test earn a perfect score
-40 Illinois State Scholars from the class of 2017
-2 Commended 2018 National Merit Students
-1 Semifinalists 2018 National Merit Scholarship Competition
-2nd place (among non-CPS schools) in the 2017 State Academic Decathalon
-We require 4 years of science with class offerings like Engineering Principles, Advanced Physiology, or Art & Emerging Technology, which help McAuley girls cultivate an interest in STEAM fields.
-We require semester in personal finance to help establish responsible behaviors in money management.
-We are 1:1 use iPad school, which incorporates various technological advances into the curriculum.
-We are in our second year in offering the popular Girls Who Code club. This is part of a national group that aims to close the gender gap in technology.
-We have two, newly-constructed, state-of-the-art Chemistry Labs

Service is a major part of our mission...
-Just 2 weeks ago McAuley raised $4,000 to support Misericordia Heart of Mercy home as part of our annual Fall Festival.

-Last February a number of our sports teams participated in the Polar Plunge to raise money for Special Olympics.
-Last April our National Honors Society with support from our student body raised $10,000 to support two ill boys from our community.
-We participated Socktober to raise money for hurricane relief victims.
-We are hosting the Banner Year Reunion (for classes ending in a '2 or '7) on November 4 at the school. It begins at 7 p.m.

Brother Rice opened in 1956 with a student enrollment of 375. Our enrollment for this school year is 700 students.

Mother McAuley opened in 1956 at current location with an enrollment of 550. Our enrollment for this school year is more than 900 young women students.

Mother McAuley:
-Alex Meneses '83, actress who starred in Everybody Loves Raymond and currently starring in Jane the Virgin
-Bridget Gainer '86, Cook County Commissioner for the 10th District
-Katie Schumacher Cawley '97, Head Coach of the women's volleyball team at the University of Pennsylvania

Brother Rice:
-Brother Rice was named the "Best Private School" on the South Side by the Daily Southtown for the 4th year in a row.
-Brother Rice has earned the first place finish in the "Shedd Midwest" competition of MATE in underwater robotics and 14th internationally where 250 schools from 17 different countries participated.
-Brother Rice choir members joined other Catholic schools in the Pueri Cantores in 2015 to sing for Pope Francis at the Vatican in Rome.
-Brother Rice had six Catholic League championships in 2017.
-Brother Rice held a dress down day for the Cancer Support Center in Mokena which advocates help and support for all types of cancer clients. BR supported one of our former math teachers who had a "double mastectomy" and our students and faculty raised over $1300 for the Center.
-Cole Geinosky and Richard Godsel, Class of 2018, were named Commended Scholars in the 2018 National Merit Scholarship Competition

Mother McAuley:
-Mother McAuley was named the "Best Private School" for girls on the South Side by the Daily Southtown for the 4th year in a row.
-Senior Charley Niego named as an Under Armour First Team All American and will be one of only 24 players from across the U.S. to compete in the tournament in December.
-Our varsity volleyball team are the reigning state champs.
-The team also was named #1 in the nation by USA Today Sports, PrepVolleyball and MaxPreps
-Head volleyball coach, Jen DeJarld named best coach in the nation
-Catherine Rogers '18 earned 36 (perfect composite) on the ACT - less than 1% of students who take the test earn a perfect score
-2 Commended 2018 National Merit Students
-1 Semifinalists 2018 National Merit Scholarship Competition

Words for the school song

BROTHER RICE FIGHT SONG
Hail our Crusader team,As it advances in the fray;
For what though the foe assail, Our Maroon and Orange will gain the day;
And we'll cheer for Brother Rice, And we shall wave our banners free;
Fight fellows, one and all, And we shall sing of victory.
(2nd ending) And we shall break right through, Straight and true, On to victory.
R-I-C-E, Go Crusaders!