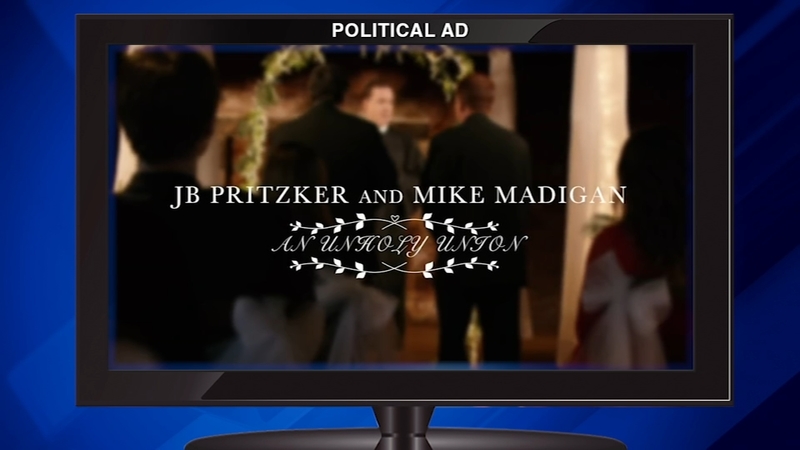 CHICAGO (WLS) -- There's a new controversial ad in the race for governor. It's getting attention and criticism for what it doesn't say.

"Repeat after me, I Mike Madigan, take you JB Pritzker as my unlawful partner in destruction," the ad begins. Titled "Unholy Union" it shows a mock mock marriage ceremony that seeks to portray Illinois' future under JB Pritzker and powerful House Speaker Mike Madigan as bleak with higher taxes and more corruption, a common theme of the Rauner campaign.

"By the power vested in me I now pronounce Illinois (bleep'd)" the actor says, his lips clearly mouthing the f-word.

"Look, Bruce Rauner is desperate with fourteen days left in the campaign, he' s willing to say anything, do anything to try to win re-election," said JB Pritzker.

"I can say very clearly that Pritzker in office with Madigan, the people of Illinois are abused, or screwed to use that word, I'll use that word," Governor Bruce Rauner said.

Equality Illinois said the governor should be ashamed of the ad.

"We are deeply disappointed by Gov. Rauner's new campaign ad that mocks marriage equality by tying two of his opponents together in a parody wedding," the LGBTQ advocacy group said in a statement.

"This commercial that he put out, which I think is offensive to many people, is just an extension of the kind of terrible campaign that he has run and an extension of the fact that he likes to bad mouth the state and is on the attack," Pritzker said.

But Rauner, who has officiated gay marriages himself, said the ad had nothing to do with that.

"That ad is about corruption and self-dealing and a broken political machine that Madigan runs and that Pritzker funds," Rauner said.