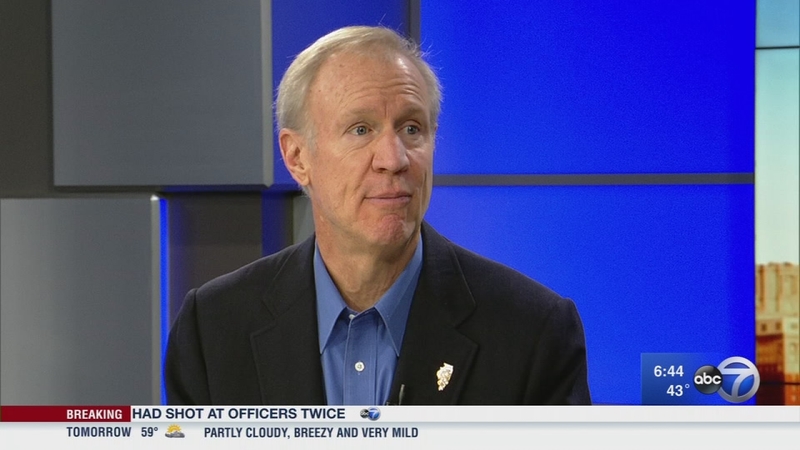 CHICAGO (WLS) -- The state of Illinois has gone about a year-and-a-half without a full budget. A stop-gap spending plan passed in order to get the state through the election is set to expire at the end of the year.

Rauner said he has asked legislators to meet with him every day to work on a budget. The governor said he wants reforms such as term limits on elected officials and bringing down property taxes passed with the budget.

After Donald Trump's election, Rauner said he called the president-elect to congratulate him and hopes to have a working relationship with Washington.

"I want to make sure we have at least some working relationship with the administration in Washington. I did that with President Obama when I first became governor, I went and met with him. I called the president-elect and said congratulations and I hope we can work together. I stayed out of the presidential race, I was appalled by the rhetoric, but it is in the people's interest here that we have a communication and that's what I started," Rauner said.
Related topics:
politicsspringfielddonald trumpbruce raunerillinois budget
Copyright © 2021 WLS-TV. All Rights Reserved.
TOP STORIES
Chicago police arrest boy, 11, considered a 'prolific carjacker'
Drug kingpins' wives behind bars, could hold keys to Chicago's cartel
Evanston shooting leaves 1 teen dead, 4 others wounded
Football coach Brian Kelly expected to leave ND for LSU: ESPN sources
Patrons snowed in for 3 days at UK pub
Gunfire enters Chicago hospital from people shooting from cars nearby
Kyle Rittenhouse ponders what's next after Trump meeting, interviews
Show More
First lady Jill Biden unveils White House holiday decorations
Bill Cosby prosecutors take case to US Supreme Court
Cyber Monday deals and how to spot scams
Caucuses still arguing over ward maps 2 days before city council vote
Opening statements start in Jussie Smollett trial
More TOP STORIES News