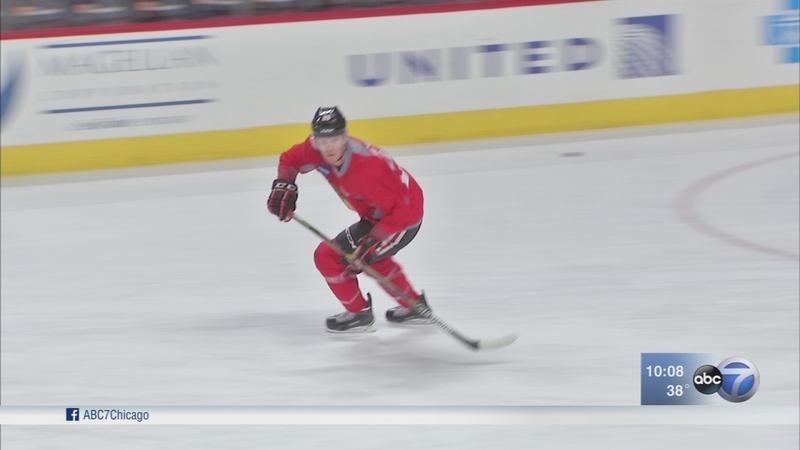 Bickell said in a statement issued by the team that "during the past few weeks, it felt like something wasn't right," and that he's "been struggling to understand what was going on with my body" since the 2015 playoffs with Chicago.

Thanks 2 all the fans for the prayers & wishes. It's all new 2 me & my family but seeing all the support from u guys makes it easier for us

Francis says the 30-year-old player will take some time to rest from the disease that attacks the nervous system. Bickell says he hopes to keep playing.
Carolina acquired Bickell in a trade with the Blackhawks over the summer. The three-time Stanley Cup winner with Chicago has one goal in seven games with the Hurricanes but hasn't played since Oct. 30.

For Blackhawks fans, it's dreadful news.

Even today Bickell remains a fan favorite; he was part of all three Stanley Cup championship teams.

"Love Bryan Bickell. I mean, he always left it out on the ice, physical player. Took care of himself, took care of his teammates," said fan Scott Steele.

Hawks fans remember during the 2015 playoffs, No. 29 was suffering from vertigo. At that time, he talked about the oddness of his symptoms.

"Been through a lot of injuries, in my part of my career, but never had anything like that. It was different. It's tough playing when you're dizzy but I feel 100 percent to come back in the lineup," Bickell said in June 2015.

"Difficulties related to MS can include weakness of muscles, problems with balance," Stefoski said. "There have been athletes over the years who have had the disease and were able to function and perform at their peaks."

Bickell said he is hopeful he will be able to return to the ice and play the game he loves. The Bickell Foundation, which helps rescue animals - specifically pit bulls - is still run here in Chicago.

"Our thoughts are with Bryan, his family and the Carolina Hurricanes during this challenging time. He has built so many lasting relationships in Chicago both inside and outside of the Blackhawks organization based on his play on the ice and character off of it. Together, we will keep him in our thoughts during his fight against the disease."