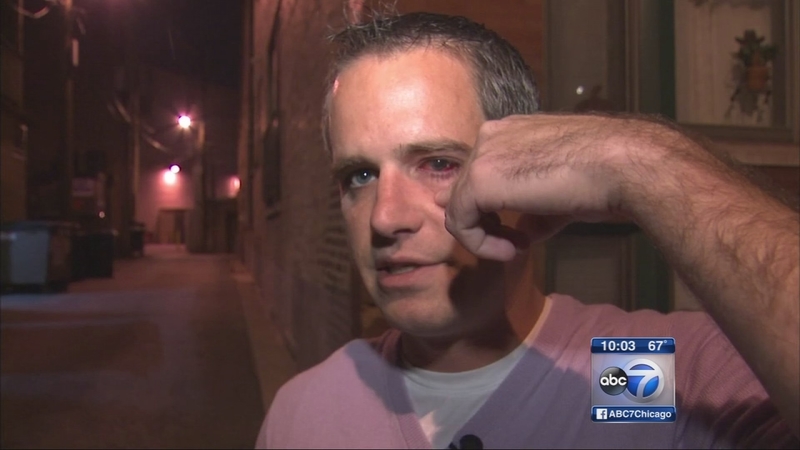 CHICAGO (WLS) -- A man who was shot in the eye during a Bucktown robbery spoke exclusively with ABC7. He said he is going public to warn others.

Mark Gill, who lives in Bucktown, was walking in an alley near Concord Place and Damen when he came face-to-face with a gunman.

"I've done this a million times," Gill said of the familiar shortcut through an alley.

But just before 10 p.m. Monday night, Gill heard a noise.

"I made it just up right through this section to hear someone yell something," Gill said.

He kept walking down the alley to his car until a woman and man robbed him.

"The male said to me, 'What are you doing man, just give us our stuff,'" Gill said. "By the time I looked up, I'm looking directly in the barrel of whatever weapon he had. He didn't hesitate and popped me in the face."

He ducked, and the angle of the bullet may have saved his life.

"Through the top of the eye and came down at angle and then lodged into my cheek bone," Gill said.

The robbers ran, and he chased them but tripped. Once in the hospital, he called his loved ones.

"I definitely believe his guardian angel was there," said Bridget Yallaly, victim's sister.

"I think this was a big wake-up call and I want the community to be aware of what happened to make sure the residents are safe," said Elizabeth Olson, victim's girlfriend.

Safe - and in Gill's case, alive - despite a gunshot wound to his eye.

"In spite of this, I was really lucky," Gill said.

Gill can't see through his left eye right now and it's too early to tell if he'll regain his eyesight. But to give you an idea of his mental strength and positive attitude, he plans to be a pirate for Halloween.