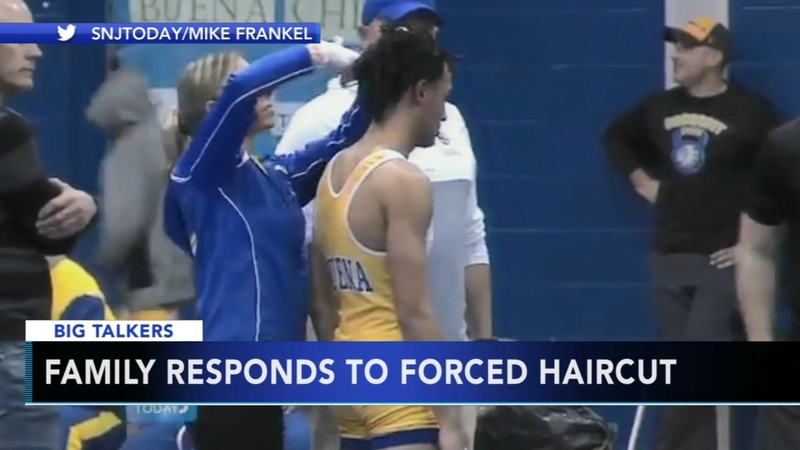 BUENA, New Jersey -- The parents of a high school wrestler whose dreadlocks were cut off after a referee told him to lose the hairstyle or forfeit his match released a statement Monday thanking those who have shown support for their son.

"Andrew has been deeply moved by the thunderous outpouring of unsolicited support, including from an Olympic wrestler, leading civil rights advocates and elected officials, after the shocking pre-match ultimatum," the statement said. "Wrestling has taught Andrew to be resilient in the face of adversity. As we move forward, we are comforted by both the strength of Andrew's character and the support he's received from the community. We will do all that we can to make sure that no student-athlete is forced to endure what Andrew experienced."

The family's attorney, Dominic Speziali, issued the statement and suggested the impromptu hair cut was due in part to the referee's tardiness. He said Johnson had a cover over his hair, but referee Alan Maloney said that wouldn't do. Johnson won Wednesday's match but appeared visibly distraught.

Speziali said Maloney didn't attend the weigh-in that day and that when Maloney evaluated the teen before the match, he didn't raise any issues with the length of his hair or the need to wear a head covering.

"The scholastic wrestling rules clearly state that referees are to inspect wrestlers' appearance and determine any rules violations prior to the start of the meet, typically during weigh-ins," Speziali said. "The referee here was late to the meet and missed weigh-ins. When he did evaluate Andrew, he failed to raise any issues with the length of his hair or the need to wear a head covering."

Maloney didn't respond to a request for comment Monday. The organization that oversees the state's high school athletics announced Saturday that he won't be assigned to any matches until the incident is reviewed.

Michael Cherenson, spokesman for the New Jersey State Interscholastic Athletic Association, said the organization had reached out to groups that assign referees "and they've all agreed" not to assign Alan Maloney to any event until further notice

An SNJ Today reporter tweeted a video of Johnson getting his hair cut. The video was shared widely on social media, with users calling the incident "racist," ''cruel" and "humiliating."