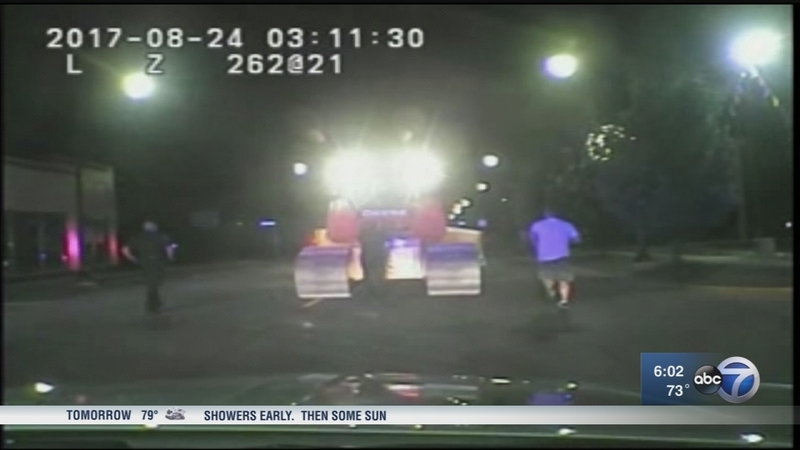 KANKAKEE, Ill. (WLS) -- In video that appears like a scene from Transformers, a bulldozer backs over a police squad car on a Kankakee street-and then leads a cordon of cops on a low-speed chase.

The never-before-seen police dash cam videos, from various angles and numerous patrol cars, was obtained Monday by the ABC7 I-Team after a Freedom of Information Act filing.

Police say 18-year old Austin White of Bourbonnais had stolen the bulldozer from a Bradley construction site at 3 a.m. on August 24 and began driving it around streets in nearby Kankakee. Clearly seen on one video the bulldozer backs over a squad car when an officer tries to stop him. That officer can be seen running from the squad just as the car is being crushed by the bulldozer, that weighed about 20 tons.

An off-duty officer first reported seeing the bulldozer spinning around a Kankakee intersection and numerous on-duty units then responded.

After backing onto the squad car, other police vehicles followed the dozer along 12 city blocks. Video obtained by the I-Team shows officers on foot running next to the bulldozer and at times jumping onto the back in an effort to curb the heavy construction equipment.

Eventually the slow-speed chase came to a stop and officers pulled the teenager out. There are seen hurling him from the top of the bulldozer to the pavement and then can be heard using a Taser to subdue White. He is being held on at least 6 felony counts including attempted murder and driving under the influence of drugs. Police say he has never had a driver's license. In total, investigators say he drove the construction vehicle for more than four miles on public streets before being arrested.