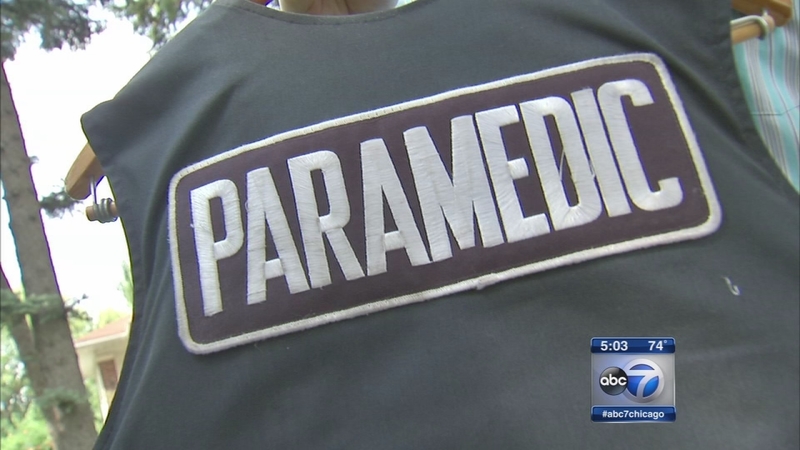 CHICAGO (WLS) -- A veteran Chicago paramedic is taking on the Chicago Fire Department over how he wears his bullet proof vest.

Pat Fitzmaurice currently wears the vest he bought with his own money over his uniform. The fire department says that is against policy.

Fitzmaurice is a 40-year Chicago Fire Department veteran - a paramedic field chief who works the West Side, where gunfire is an unwelcome, but frequent reality.

"The likelihood I could catch a round is significant," he said.

After a couple of close calls three years ago, Fitzmaurice bought a bullet-resistant vest - much like police wear. He paid for it himself - over a $1,000 - and set it up to have his gear at the ready.

He's been wearing it ever since, but after pictures from last Friday were seen, Fitzmaurice was given a verbal order to not wear the vest on top of his uniform. He can wear it underneath, but not externally.

The fire department says this is a uniform issue. That the vests "... are not authorized as outerwear". And that that "...same policy would be applied to any other item..." that would be worn on top of the uniform.

Wear the vest underneath - fine. Fitzmaurice says he's done that, but it doesn't work because the vest is too cumbersome, too hot, and is designed to be worn externally.

"I cannot conceive of a paramedic wearing this under his shirt and doing 25-30 runs a day carrying people up and down stairs. That's crazy," Fitzmaurice said.

Fitzmaurice has long been an outspoken critic of fire department leadership and directives. He openly supported mayoral challenger Chuy Garcia and believes the vest issue is political payback, but he will obey the order while he challenges the policy.

Police and paramedics serve different functions, and the premise is their uniforms should be distinctive. But shouldn't paramedics be allowed to wear vests in the same fashion as police?

The fire department says there hasn't been a great demand from paramedics for vests, but if there is, it would be open to considering their external wear - provided there is an acceptable uniform policy, and that the paramedics, and not the city, would pay for them.