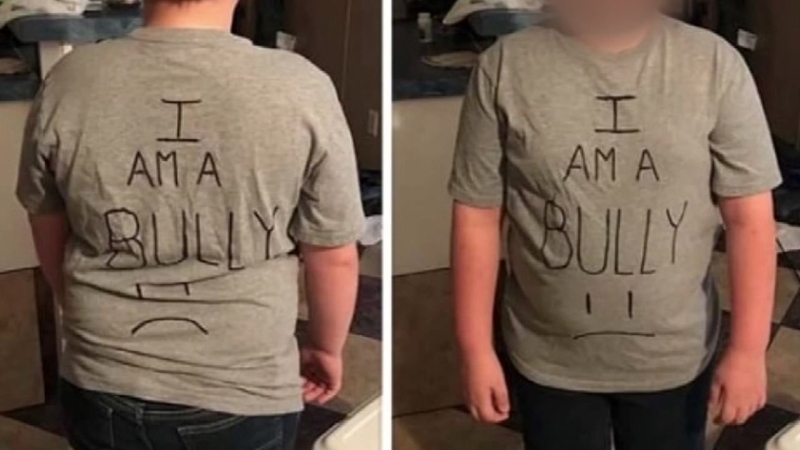 SPLENDORA, Texas -- A mother from Splendora, Texas, who heard her son had been bullying kids at school came up with a creative way to teach him a lesson.

"He was calling other boys 'stupid', calling them 'idiots,'" said Star, who wanted to be referred to by her first name.

When Star learned what her son was doing, she had him wear a t-shirt that read "I am a bully" to school on Friday.

"I'm a very old-school parent," said Star. "I don't coddle my children. I don't sugar coat the world to them."

She even posted the pictures on Facebook, but she told ABC13 she did not do that to embarrass her Greenleaf Elementary fifth grader.

"I posted it to reach out to the parents of any of the kids my son may have bullied so that each one of them could get a personal apology," said Star.

Negative comments forced her to remove the post but she stands by her decision.

"I wanted to know what he learned from it and he said, 'I learned that I didn't like the way that that felt and I don't want anybody else to feel that way because of me,'" Star said. "That's exactly what I wanted him to take from it."

"I don't think it requires the scarlet letter, searing the letter 'B' on his forehead," said Dr. Pesikoff.

Pesikoff says he understands why Star would be upset about her son bullying other kids, but says this shirt could do more harm than good.

"Not a good idea to embarrass your child and solidify a negative identity in an elementary school child," said Dr. Pesikoff. "She needs to find somebody to help her and I think the school is one resource."

But Star spoke with her son's counselor and teachers at Greenleaf Elementary and she says they supported her decision.

"They all were 100 percent on board. They understood why I was doing it and that, for my son, this is what works," said Star.

Ensuring a safe, physical, emotional, and social environment is one of Splendora ISD's Core Principles. With that in mind, our counselor checked on the child throughout the day on Friday and plans to follow up with the student and the parent early this week."