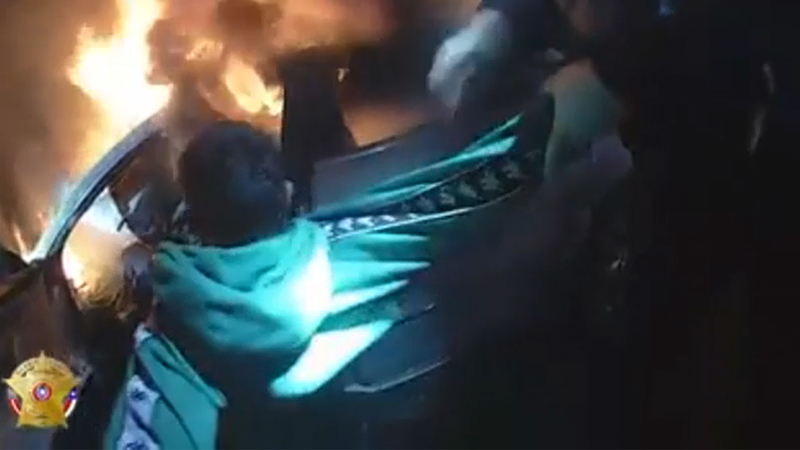 HOUSTON, Texas -- Deputies were quick to rescue a man trapped in his vehicle during a fire, and it was all caught on camera.

Earlier this month, 20-year-old Jonathan Morales-Fuentes fell asleep behind the wheel and crashed into a tree in Houston, Texas.

"I rolled down the window, but I was sleepy," he said. The next thing he remembers is slamming his car into a tree.

According to authorities, a sergeant was on his way home when he found the vehicle on fire and saw a wrecker driver was attempting to get in the car.

"I never took that road to go home before. I was going back to leave a report at the office," said Sgt. Lance Anderson, who drove up on the burning car. "There were so many coincidences that morning."

Anderson added he believes he was meant to be there and meant to save a life.

Anderson called other deputies to the scene and used multiple fire extinguishers to temporarily slow down the flames.

"We went through seven fire extinguishers trying to control it. That's all we had," he said.

Bodycam footage shows the deputies trying to free the driver, whose leg was trapped underneath the damaged dashboard.

"We might have to break your leg, bro, I'm sorry," a deputy tells the driver.

An 18-year-old woman was rescued by two strangers after a fiery crash on Highway 6.

After the struggle, the deputy explained on bodycam that the man's pants were stuck, so he cut his pants and that's what freed him.