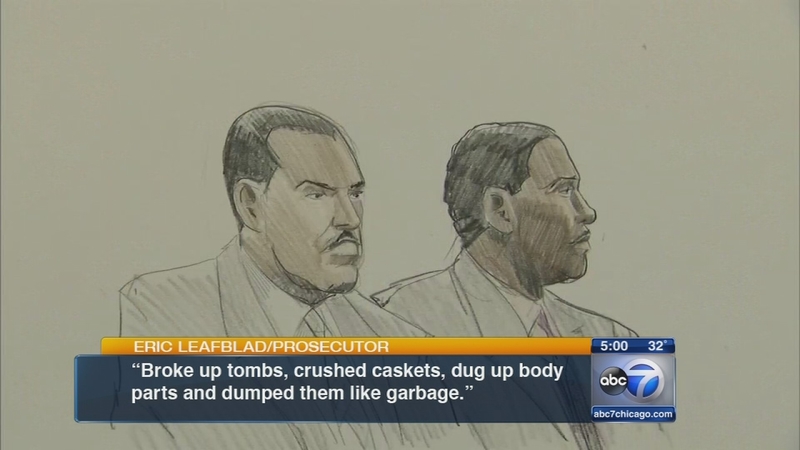 BRIDGEVIEW, Ill. (WLS) -- An FBI agent testified told jurors that 1,500 bone fragments were found at Burr Oak Cemetery. Keith and Terrence Nicks are accused of desecrating graves and bodies in a scandal that exploded in the summer of 2009.

Their trials began Wednesday. Keith Nicks was the foreman of the grounds crew. He hired his brother, Terrence, to help out.

Prosecutor Eric Leafblad told jurors the Nicks were part of a crew of cemetery workers who "broke up tombs, crushed caskets, dug up body parts and dumped them like garbage."

During the month-long investigation at Burr Oak, more than 1,500 bones were recovered. They belonged to at least 29 people.
FBI evidence expert Doug Seccombe walked jurors through the items he and his team found on-site. He showed photos of jawbones and other human remains, as well as broken caskets and burial tombs.

"Burr Oak Cemetery was becoming full, soon there would be no more new burials and that presented a problem for the people who worked there... soon their jobs would be over," Leafblad said.

The scandal exploded in the summer of 2009. The historic black cemetery is where Emmitt Till and several sports legends are buried.

Carolyn Towns, who was the cemetery manager, pleaded guilty to selling burial plots off the books and pocketing the money.

Defense attorney Tony Peraica told jurors that his client, Keith Nicks, was "just a working stiff. A foreman just doing his job."
David Lowery is a civil rights activist who said the problems at Burr Oak preceded the defendants' employment there.

"They're basically being used as scapegoats," Lowery said. "When he was hired, he made it known that area had problems and the owners of the cemetery never did anything about it."